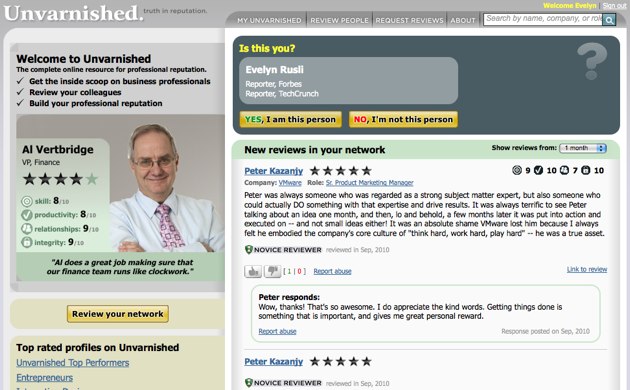 Remember Unvarnished, the LinkedIn-Yelp hybrid that threatened to unleash a Pandora’s box on the internet? Back in March, we called it “A Clean, Well-Lighted Place For Defamation,” arguing that a repository for anonymous reviews could become a “nicely indexed, digital burn book”— a playground for vengeful co-workers and frenemies to wreak havoc on the reputations of their subjects.

That doomsday, anarchic scenario has not come to pass— at least not yet.

Although I think the tinder is still there, co-founder Peter Kazanjy, to his credit, has carefully managed the development of the controversial site. Unvarnished, which has been in invite-only beta mode since its launch, has just “tens of thousands of users,” according to Kazanjy. The selective nature of this community has worked in its advantage, encouraging largely positive, substantive reviews, with 60% of the reviews touting a 5-star rating (the highest mark). And according to Kazanjy, since March, there have been less than 10 user complaints, thus reflecting a lack of abuse.

Now, the question is: Can Kazanjy maintain his garden as he opens the gates just a little bit wider?

This morning, Unvarnished announced that they will grant employees of roughly 200 tech/tech-related companies access to the site. Facebook users who are part of approved “work networks” (such as Zynga, Elevation Partners and yes, TechCrunch) will be able to sign up for an account without an invite. That may sound like a drop in the bucket, but many of these corporations are some of the largest in the tech sector, like Cisco, Apple, IBM, Google, Microsoft and Adobe, representing hundreds of thousands of employees. Meanwhile, all the current and new users will also have the power to invite people outside of these networks. (More info on the company’s blog.)

For those unfamiliar with Unvarnished, it is fundamentally a reputation management site. Users can claim their own profiles, create new profiles for other professionals and submit anonymous reviews. Unlike LinkedIn, you have to accept every review, negative and positive— unless the review violates community guidelines (i.e. false criminal allegations). When you post a review, your identity is anonymous but you carry a “trustworthy rank” that goes up or down depending on how people rate your reviews ( a small incentive to be fair).

According to Kazanjy, who is acutely aware of the controversy,  it’s all about carefully and gradually rolling out Unvarnished: “We wanted a slow, responsible approach, to ensure that the community was forming in the right direction,” he says. “We wanted to make sure it was a professional and productive community.” The stats seems to back up his assessment— only 5% of reviews are one or two stars and 75% of reviews include detailed explanations.

Indeed, it does seem to be forming in the right direction, but many of my initial concerns with Unvarnished remain.  As the site becomes larger and extends far beyond the close-knit tech community, there is a greater chance of trolls finding their way into the system. A friends-of-friends network is very different than the wild, wild west of the internet. At 50,000 Unvarnished works. At 50 million, can it sustain its credibility— or would success be a double-edged sword?