Writing is hard. Just ask anyone. Stringing words together, spelling them right, and ensuring you follow rules of grammar and propriety are the blue-collar labor of the intelligentsia. So say you want to send an email to someone who speaks a language other than the one you speak? Do you go out and spend years to learn that language and then report back, ready to splatter out idiom and tricks of usage like an old pro? Absolutely not. You use something like AIType. 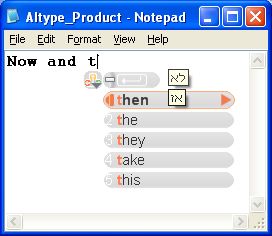 AIType is for folks who generally speak and understand a language but aren’t quite certain on some of the rules and conventions. For example, a foreigner writing a note to someone in English will often mix up word order or futz up word choice. AIType is a predictive system for writing that, in short, lets you sound like you know what you’re doing.

Based on a catalog of phrases, the system searches for the next applicable word and lets you translate that word into your own language, ensuring you mean what you say. It’s not perfect. For example, some words feature more prominently than others in the list, leading to mistakes in word choice. The crystal lattice of language understanding is hard to crack and so you could introduce glaring problems into the text without meaning to.

Regardless, tools like AIType will help folks write better. It works like a combination spell check, grammar checker, and Google Scribe. AIType is free and you can download it right now to add its features to almost any Windows application (no OS X support yet).

Obviously programs like this have been around for a long while and many have led to some delightful malapropisms thanks to overzealous suggesting engines. Google is also interested in this market as is EType so I’d say AIType needs to figure things out pronto and get this service out as widely as possible.

The service supports multiple languages and has a number of databases already compiled. It learns based on texted entered most of the rules of usage.

The company will sell “servers” that will allow financial and other companies to embed AIType technology into their desktop and laptop fleet without risking security breaches through cloud interaction. Most of the prediction, in fact, is made on AIType’s own servers and this would plug that hole.

While this program won’t help you learn another language – in fact, if you’re not at least slightly conversant in that language it won’t work at all – it’s good way to prevent potential shamefacedness while peacocking to your lady friends in foreign lands.