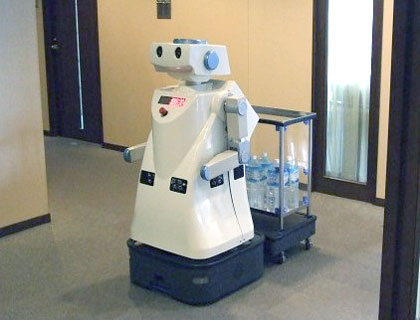 Japan-based Muratec has developed a cute “omni-directional autonomous transportation robot for public spaces”. Dubbed MKR-003 [JP], his main selling point is the built-in “omni-directional mobile mechanism” that allows him to move anywhere, on four wheels, and all by himself (to some extent).

Designed mainly for use in hospitals, the robot boasts an ultrasonic sensor, a laser range sensor, a stereo camera (his “eyes”), voice recognition, a touch screen on his back (to display information like maps), a small LCD screen on his chest (to display messages), and the ability to speak basic sentences.

Muratec showed the robot first back in 2008 and has been working on improving it since. Its main purpose is to transport things from one point to another within buildings, including using elevators. Once an operator “teaches” MKR-003 the route, he starts delivering things on his own, avoiding obstacles on the way. 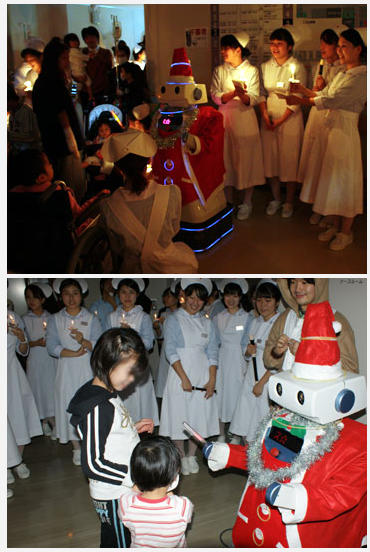 The picture above shows him dressed as Santa Claus during a performance in a Japanese kids hospital at Christmas 2009.

Here’s two short videos showing MKR-003 in action during an exhibition in Tokyo: