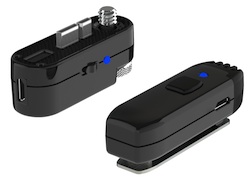 Looks like Blue isn’t the only company getting in on the Flip camera microphone market. Scosche’s offering is quite a bit more advanced though, with wireless Bluetooth controls, a rechargeable lithium ion battery pack, and DSP noise cancellation.

Scosche’s new freedomMIC plugs into the Flip UltraHD’s FlipPort, and will allow a user to have a microphone that works like a true wireless microphone system. To me, this significantly improves the usability of the Flip camcorders; we’ve never particularly cared for their audio quality. The freedomMIC will be available mid to late December, with an MSRP of $99.99. Not a bad deal.

The freedomMIC features a high performance condenser microphone with DSP noise cancellation. Users can also wirelessly control record and stop functions remotely from the microphone/transmitter. The wireless system operates on Bluetooth Class 1 technology and provides up to 100 feet of wireless range. The complete system features the wireless transmitter and the microphone that that clips directly to the subject.

The freedomMIC is powered by rechargeable lithium ion batteries in both transmitter and receiver, which provide up to 4 hours of recording time. The receiver also features a pass-through tripod mount for securing the receiver to the camera and retaining the ability to use a tripod.

The Designed for Flip initiative teams Flip Video with leading companies in multiple product segments to provide a wide selection of general purpose and specialized products for both current and future Flip video cameras.

The freedomMIC will be available at scosche.com/flip/ and from retailers that selling the new Flip cameras that feature the new FlipPort line in mid to late December 2010 for $99.99 MSRP.