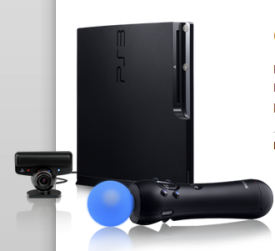 As anticipated, Sony’s motion control system, PlayStation Move, will be available exclusively for the PS3 at retail stores across North America on Sunday, September 19, later than expected but still way before Microsoft’ Kinect hits the market (coincidentally, I just played with Kinect for the first time this morning, courtesy of Microsoft, and absolutely loved it).

Update: for the record, if you’ve pre-ordered the system you’ll be able to pick it up starting today (Sept 17) – the September 19 date is for when PlayStation Move will be pushed to new customers in stores across North America.

For consumers who don’t yet own a PS3 system, the PS3 Sports Champions Move Bundle for $399.99 includes all of the above, as well as a 320GB HDD model PS3 system. For those who already own a PS3 and PlayStation Eye camera, motion controllers will retail separately for $49.99 and the optional navigation controller will retail for $29.99.

Let us know what you think of the prices, and if you’ll be buying – and why (not) of course.