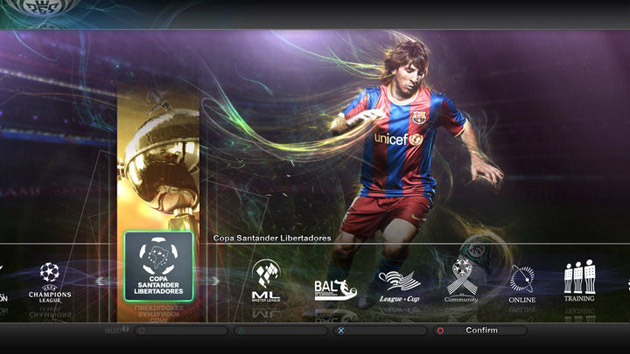 The European soccer season is well under way, and that could mean only one thing: the new FIFA and PES games are right around the corner! I’m a PES man myself, but I’m more than willing to give the new FIFA a try. And why not? Both EA and Konami have released demos of both games today. Here’s what you can expect.

The demos are available for all the major platforms, including Xbox 360, PS3, and PC. I downloaded the PES demo this morning for the PC before I left, and I think it’d be safe to say that the name of the game could be called Konami Presents Lionel Messi and a Bunch of Players Who Aren’t Messi.” The guy is all over the presentation.

The teams in the PES demo are Barcelona and Bayern Munich. It’s a standard exhibition match at the Camp Nou.

My complaint: how long would it have taken Konami to update the Barcelona squad? Ibra is still in there, as is Hleb, and there’s no Mascherano. At least David Villa made the cut.

Watch out, Europe: you’re about to meet the lethal strike-force of Villa, Messi, and Pedro (or Bojan).

As for FIFA, well, EA has gone all out. Despite the fact that EA has gone with the perpetually injured Kaká as its frontman, the demo is loaded. You can choose from Real Madrid, Chelsea, Bayer Leverkusen, Juventus, and Lyon. The stadium is the Santiago Bernabéu, Real Madrid’s home estadio.

To be fair, I haven’t played the FIFA demo yet, but I did play the game at an EA event during the summer. I don’t know, I had fun playing it with Mr. Peter Ha.

One of the fun things about the PES games is the number of fan patches that are released. Since Konami doesn’t have the license for a few teams and leagues, fans have stepped up and filled in the gaps.

The question on everyone’s mind today is: will Real Madrid actually do something in the Champions League this year. With Mourinho, I’d say yes.