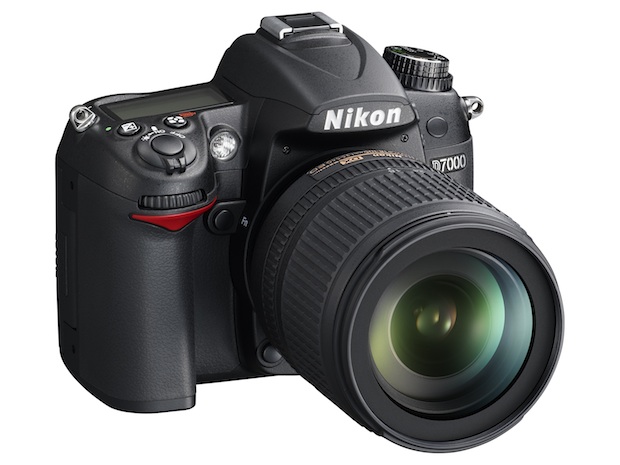 Looking for a DSLR that pretty much does it all? Say you need great low light performance, auto-focus while shooting HD video, and a new image processing system that gives you a 6 FPS burst speed for those action shots? Nikon’s got you covered with their latest DX format camera, the D7000.

The D7000 has a new improved EXSPEED 2 processing system, which when combined with their new 39 point AF system pretty much guarantees that you’re going to get the shot you want. Along with the improved auto-focusing system, the D7000 will shoot 1080p at 24 fps, or 720p at up to 30 fps. The ISO range is pretty spectacular as well, ranging from ISO 100-6400, however it will extrapolate up to 25,600. That’s pretty much unheard of in a DX sensor. The D7000 also has an expanded scene recognition system, allowing the camera is switch between modes automatically and without requiring the user to manually choose. The scene recognition system is a Nikon exclusive, and uses a 2,016 pixel 3D color matrix meter RGB sensor, which makes it possible for the D7000 to have the most accurate white balance of any current DSLR. The best news is that the D7000 will be available mid-October for $1199 for the body only, and $1299 with an 18-105mm VR lens.

EVOLUTION OF THE REVOLUTIONARY: THE NIKON D7000 D‐SLR IS THE PREEMMINENT DIGITAL CAMERA FOR DEMANDING PHOTO ENTHUSIASTS

Nikon Inc. today introduced the new D7000 digital SLR camera designed to fulfill the needs of passionate photographers who demand exceptional performance, reliability, and unprecedented levels of control and versatility in a compact form factor. Engineered as an ideal balance of durability and functionality, the D7000 D‐SLR features a multitude of new enhancements and updated Nikon technologies, which results in stunning photos and amazing full HD (High Definition) movies.

“The D7000 D‐SLR creates a new class of Nikon camera by delivering exceptional quality, control and an innovative feature set; this is a camera that enables D‐SLR users to achieve a true expression of their creative vision, while concentrating primarily on image quality above all else,” said Lisa Osorio, general manager of marketing at Nikon Inc. “When you combine the innovation of the agile D7000 with the exceptional and robust line of NIKKOR lenses and accessories, the potential for D‐SLR photographers and filmmakers is limitless.”

The D7000 D‐SLR features an all‐new 39‐point AF System, which includes nine center cross‐type sensors that operate with more than 60 NIKKOR lenses. The 39 points in the new Multi‐CAM 4800DX AF module work together to provide superior subject acquisition and fast tracking capabilities, allowing photographers to confidently capture a player stealing third from the sideline to fast‐moving wildlife. Additionally, photographers can activate dynamic or single point AF, configurable in combinations of 9, 21 or 39 or a 21‐ point ring to match a variety of shooting styles and situations. Photographers can activate 3D tracking, which continuously follows moving subjects within the 39 AF points, highlighting the activated AF point in the viewfinder.

Nikon Continues the Low‐Light Fight
The D7000 D‐SLR continues Nikon’s tradition of providing photographers the confidence to shoot in low‐light, knowing they will capture high quality low‐noise images. The camera’s native ISO range of 100‐6400 affords the versatility to photograph in challenging lighting conditions, such as when indoors or in the evening. The ISO range can be expanded to a Hi‐2 setting of 25,600, which was previously found only in Nikon FX‐format territory. The resolution of the camera renders a pixel size of 4.78 μm, which allows more light to be gathered, resulting in a correctly exposed image that has less noise and finer grain.

Advanced movie features also allow exposure adjustment on the fly while recording. The D7000 D‐SLR offers variable frame rates and resolutions, and can record 1080p at a cinema‐like 24 fps, or a web‐friendly 720p at either 24 or 30 fps for up to 20 minutes per clip. Once recorded, users are able to edit and trim video clips in the camera to save time in post production. Whether utilizing a wireless or hot shoe mounted microphone, sound can be recorded via the stereo microphone input for professional audio results.

To further simplify movie shooting, Live View is activated by a single dedicated switch, and HD video recording is achieved by pressing a single button. The D7000 D‐SLR also incorporates a built‐in HDMI output CEC compliant (Consumer Electronic Control) that allows users to connect it to a HDTV and playback with most HDTV remote controls.

By adding versatile NIKKOR lenses to the equation, photographers can create a variety of photo perspectives to video such as isolating subjects with a shallow depth of field, and recording in low‐light conditions. Combining the D7000 D‐SLR with NIKKOR lenses also delivers the sharpness essential for HD video, and Nikon’s innovative Vibration Reduction (VR) II technology helps to eliminate the effects of camera shake.