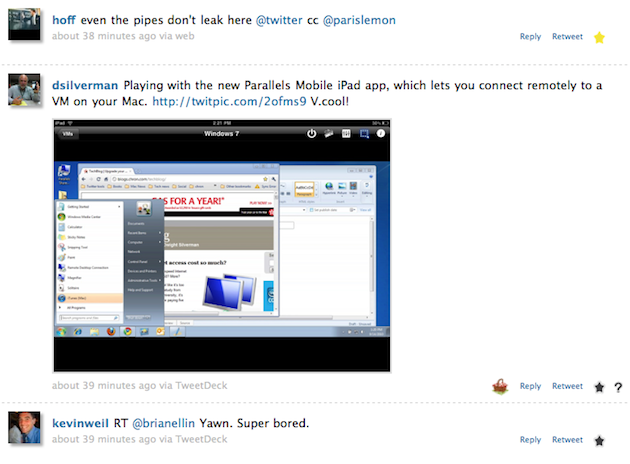 The entire Internet seems to be guessing about what Twitter is going to unveil at their big event later this afternoon. Analytics, deeper Google integration, the killer business model? All fair guesses, but we’ve just heard from a source at least one of the things being announced tonight: inline pictures and videos on twitter.com.

Such a feature would mimic functionality that some third-party Twitter clients have been doing for a while. The most notable of these may be Brizzly (this was one of their original key features) — but they shouldn’t be too upset about Twitter copying their feature now as they’re in the process of being acquired by AOL. Given the backlash Twitter has gotten recently for rolling out features that third-party clients offer, our breaking of the Brizzly acquisition news would seem to be a bit of good timing for them.

It’s not clear if these new features are part of the “nifty” ones that former employee Alex Payne tweeted about way back in February (which got him in a little bit of trouble for causing an uprising in the developer community), but that’s probably a pretty safe bet. It shouldn’t be a surprise that Twitter has been testing new features internally for quite some time, as most companies do this. From what we’re hearing, this inline media functionality has long been one of them.

And they accidentally leaked a test of this a bit early back in July. At the time, they noted:

We’re constantly exploring features and settings. What you saw was a small test of a potential consumption setting for inline media. We show inline media on our own iPhone and Android apps.

If Twitter is rolling out inline pictures and videos in the main Twitter stream, it’s probably safe to assume that a larger redesign may be coming as well to make room for the new features. Will there be a new “media” tab to see just images and videos that friends are sharing? It will also be interesting to see if these videos and images are more tightly integrated into tweets by way of some new metadata — and what partners are on board.

We’ll be heading over to Twitter HQ in a few hours to learn more. Stay tuned.

Update: A bit of code on Twitter.com may hint at the inline media as well:

Just a guess, but if a tweet has a picture attached, you may see a little icon which you can click to expand.

(Note: the image at the top is taken from Brizzly — not Twitter, just yet. The image below is from the leak in July.)