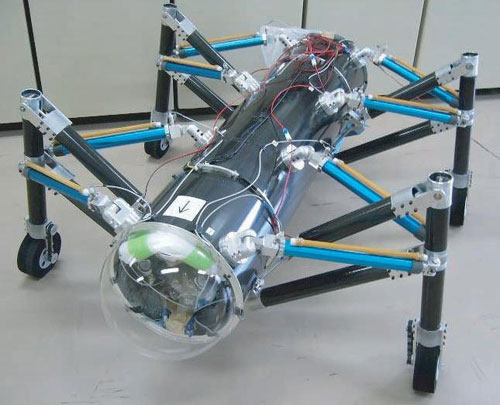 We showed you robotic fish, robotic dogs and robotic snakes in the past, and we know you were just waiting for robotic grasshoppers. But thanks to Tokyo Institute Of Technology, you can consider those animals now covered, too.

The so-called Air Hopper is a four-legged robot that can not only move around thanks to its four wheels but also jump, just like a real grasshopper does. While it’s able to cross slightly uneven ground by just walking over it, the robot can jump over bigger obstacles by using built in pneumatic cylinders.

In experiments, the Air Hopper was able to jump as far as 70cm forward and 40cm high. The robot’s body is made of reinforced plastic. It’s 129cm long, stands 52.2cm tall and weighs 32.4kg.

I am sorry to say there’s no video available at this point (I searched everywhere).