As the web becomes increasingly saturated with video, flash sales, auctions and live streams, there’s a growing need for a major portal to filter and organize this flood of incoming data in real time. One contender is Live Matrix, a TechCrunch Disrupt alum that is trying to index every live event on the web. While Live Matrix has been described as the web-version of TV Guide, founders Sanjay Reddy and Nova Spivack, are shooting for a more ambitious distinction: the Google for the “time dimension of the web.”

The founders took one step towards that lofty mission on Sunday evening, with their official beta launch. Although they are still waiting for traffic numbers to roll in, the founders told us that the number of content providers (which includes flash sales sites, like Gilt Groupe, to sports news programs, like ESPN3, and everything in between) has more than doubled with 300 new sign-ups in less than 12 hours. Before the launch, the site had 200 providers and was serving up roughly 100,000 live events per week.

However, even if that 100,000 turns to 200,000 in short order, that’s still a modest sliver of the “live” web. Of what’s on there, it can be difficult to find compelling, relevant options and the search function isn’t quite perfect yet. For example, a search of “Live Matrix” should theoretically pull up the homepage’s featured event: “Live Matrix Official Beta Launch,” instead I got something titled “Creating and Using A Salary Increase Matrix.” 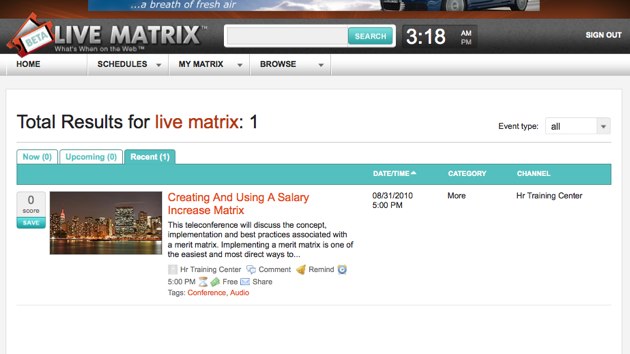 Reddy and Spivack recognize the long slog ahead. Since Disrupt, the pair have tried to increase personalization, refine the user interface and enhance the portal’s usability. For the next release, due later this year, they will beef up the recommendation feature, search functionality, and continue to improve personalization, which they see as key to relevance. For the content providers, Reddy and Spivack hope to accumulate enough data, aka users and traffic, to create a premium analytics service. According to Spivack, this will eventually include predictive analytics that will tell providers what kind of audience (size and demographics) they can expect for future events.

For my full interview with the founders of Live Matrix, see video above. The co-founders defend their business model and elaborate on what we can expect from future iterations.