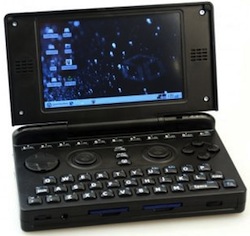 Remember the Pandora handheld gaming console? The one that runs Linux, is open source, and designed by committee? Well, they did finally get the first 1,000 pre-orders shipped, and they are expecting to send out another 3,000 before the holidays.

The Pandora is basically a miniature computer device running Linux. It runs all 8-Bit and 16-bit gaming emulators, as well and a few of the 64-bit ones as well. It’s been a long road for the Pandora, particularly since it’s been designed and built by a bunch of hobbyists instead of a major corporation. You can still pre-order units, they sell for $350. The Register reports that the next batch of units are in production, and pre-order units should start shipping sometime in December.

While the Pandora is primarily a gaming handheld, due to it’s open source nature you can pretty much run anything on it. Apparently some users have set them up as file servers, you can use them as a portable internet device, the options are endless.