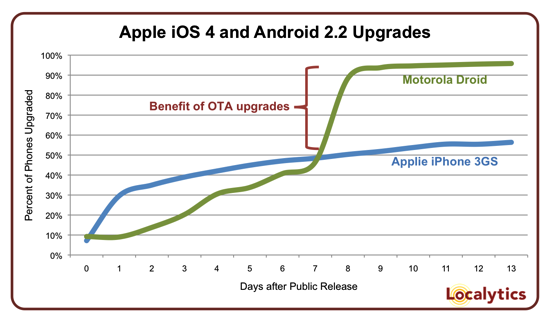 In the smartphone world, it is generally a good thing to keep everyone on the latest operating systems by pushing out upgrades. To the extent that iPhone or Android can get their installed base of users on the latest and greatest OS, the more those users can enjoy new apps built to take advantage of the new features of the OS. But when it comes to pushing software upgrades, Android has the upper hand because it can push them over the air, whereas the iPhone still requires users to download the upgrade to their computer first and then transfer it over to their iPhones with a cable.

Some people just never upgrade. Apple released its latest iPhone operating system, iOS 4, back in June. It came installed on new the iPhone 4, but was also pushed through iTunes to existing iPhone 3GS owners. Yet two months after the release, more than 20 percent of iPhone 3GS users still had not upgraded, according to an estimate by mobile analytics firm Localytics.

Meanwhile, less than 5 percent of Droid users had not upgraded only two weeks after the availability of the Froyo version of Android 2.2. (At the same point in time, 44 percent of 3GS iPhones had not yet upgraded). The reason for Android’s more successful upgrade rate is over-the-air upgrades were rolled out over a short period of time, requiring less work from users.

The chart above shows the OS upgrade rates for the 3GS and the Droid during the first two weeks after the software became available. While 30 percent of iPhone 3GS user upgraded right away in the first two days, getting the rest of the users onboard was an uphill battle. Eliminating the two-step process would help get everyone on the same OS faster. On the other hand, I wonder if that actually helped sell more iPhone 4s.