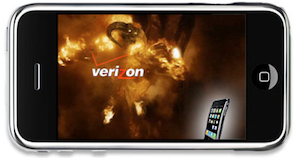 If you think back to 2005, you’ll remember that the Motorola RAZR phone was all the rage. Not entirely unlike the iPhone today, it was the sleek phone that everyone wanted. But if you happened to be on the largest carrier in the U.S., Verizon, you couldn’t get one. Again, sound familiar?

It wasn’t until just about a year later that a version (the V3c) finally came to Verizon. It was a long wait, but I was excited to finally have access to the device, I pre-ordered one the first day I could. When I finally got it, there were some surprises in store. Rather than having the same colorful user interface that my friends’ RAZRs (on other networks) had, it had some god-awful red proprietary UI made by Verizon itself. It also came with the added bonus of having Bluetooth file transfer capabilities disabled by Verizon. And it was loaded to the brim with Verizon’s V CAST garbage.

So while part of the wait was undoubtedly due to Motorola getting a CDMA version of the device ready to sell, a bigger part was likely Verizon negotiating and working to load the device up with their crapware. That doesn’t speak well for the supposed Verizon iPhone.

Rumors of the iPhone coming to Verizon are louder now than they’ve ever been. There is no doubt that Apple has been working on a CDMA version of the device (codename: N92) for some time now, and perhaps is even in the process of manufacturing it as we speak. But whether that device is destined for Verizon or Sprint (the other U.S. CDMA provider) remains to be seen. Undoubtedly, Apple wants their device on the largest carrier in the country (Verizon), but they’ll also undoubtedly will have to make sacrifices to make that happen. And Apple doesn’t like to make sacrifices.

Much has been written about how Apple will probably have to take a lower subsidy from the other U.S. carriers if they move beyond their exclusive deal with AT&T (which gives them an outrageous subsidy that adds billions of dollars to their bottom line). But there’s not a lot of talk about the more fundamental thing Apple may have to give up by putting the device on Verizon: control.

Remember, when Apple first launched the iPhone in 2007, the first carrier they went to talk to about a deal was Verizon. The two sides could not come to an agreement at the time, and the main issue was undoubtedly control. Apple had basically no leverage at the time as they were the new player in the space with zero market share. Verizon knew that and probably laughed at some of Apple’s demands. So Apple went to AT&T, and the rest is history.

Those Apple/Verizon discussions have undoubtedly been had many times since the massively successful launch (and subsequent updated version launches) of the iPhone. Both sides know that it makes sense for the most popular smartphone to be on the most popular network. But the question remains: who is willing to give up something to make that happen?

The past week, I’ve written a number of posts with the same basic refrain: the carriers suck. Each of those posts was in the context of Android, and specifically how the carriers are taking advantage of the openness of that mobile OS to take us back in time 5 years where they had complete control over the U.S. market — the time before the iPhone. Verizon is the worst perpetrator so far. Is there any doubt they want to do the same thing with the iPhone? 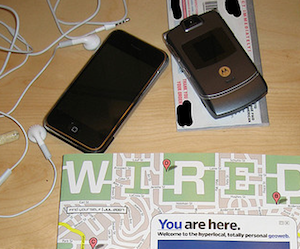 Verizon can no longer laugh at Apple’s ideas, but instead the prospect of the iPhone as it is currently constituted on their network probably scares the hell out of them. Sure, they’d add billions in revenues from new contracts, but they’d essentially be a dumb pipe for this device. As they’ve proven with all of their other devices — including the RAZR and now their Android phones — they don’t want to be that. They want to be in control of not only the network, but at least some of the content on that network.

So now the question in my mind is whether or not Apple is willing to make any concessions to Verizon? Would Apple allow them to include a V CAST app standard on every iPhone, for example? One that couldn’t be deleted? What about apps in the App Store that only work with Verizon iPhones and not AT&T iPhones (just like Skype for Android)? What about interface changes (either software or hardware) that show more prominently that this is a Verizon phone? Or what about a cut of all apps sold and all music/movies/tv show downloaded?

It’s hard to imagine Apple allowing Verizon to do any of that. But they may have to if they want to deal.

All I’m saying is that I’m still not sold on the rumors of an iPhone on Verizon’s network being a slam dunk. It certainly might come, but I suspect Apple will have to make some concessions they would never make in normal circumstances to make it happen.

If they’re not ready to do that just yet, might we see a T-Mobile and Sprint version of the iPhone first? That would certainly give Apple some more leverage by making Verizon the only carrier in the U.S. without the iPhone. And Verizon is probably okay with that right now as they watch Android sales explode and watch their power over that OS — which they can control — expand.

Apple gets a lot of shit for not being as “open” as Android. But as always, things aren’t as black and white as they seem. Verizon’s repurposing of Android is starting to show this very clearly. That level of outside manipulation, wrapped in the faux cloak of “openness”, is something that Apple is never going to allow on a device that they make.

And no matter how badly we all want the Verizon iPhone, we don’t want that.