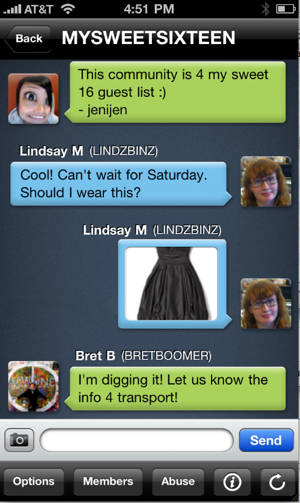 At first glance, the stats from free text messaging startup GOGII and its textPlus application sound like they’re too big by an order of magnitude: 3.7 billion messages sent since June 2009. 8.5 million downloads. 23 million phone numbers in the network. But they’re real, and they’re a big business. Today the company is launching two new features that make the textPlus experience even richer, with support for sending images and a nifty new feature called ‘Face Text’.

The first feature is self-explanatory: you can attach images to your outbound text messages and send them for free. The second feature, called Face Text, is related, but it comes with a twist. Upon activating the feature, textPlus will take a photo using your phone’s front-facing camera whenever you hit the send button, allowing you to quickly attach facial expressions whenever you send a message (think of it as emoticons meeting the photo booth — see the screenshot above). You can turn it off and there’s a countdown timer so the feature should never surprise you, and I suspect that the teenage audience that absolutely loves these apps will eat this up.

GOGII is one of a new breed of startup building on the relatively ancient and ubiquitous technology of text messaging. They compete with Pinger’s TextFree, which we wrote about last week and has similarly massive stats, and both companies have grown by leaps and bounds in the last year (interestingly, both Pinger and GOGII are part of the Kleiner Perkins iFund).

GOGII’s textPlus shares at least one major feature in common with Pinger’s TextFree: it allows you to send unlimited free text messages to your friends. But textPlus has a few differences. For one, it doesn’t give you a new unique phone number like TextFree does — instead you’ll have to message your friend’s username to the GOGII shortcode (users will be able to get their own phone numbers in the near future).

Another key differences lies in the community nature of textPlus, which TextFree doesn’t offer yet. The service effectively brings chat rooms to the mobile phone — fire up the app and you can create or join a chat room about, say, skateboarding, which behaves a lot like the AOL chat rooms of yore (around 500,000 communities have been created so far). But you can also elect to receive push notifications whenever there’s a new message, which turns into a powerful tool when you combine the feature with a private community. GOGII says that many people create private communities for their families or sports teams, which can be powerful for staying in touch with a small group: when a member of these private communities sends a chat message, it gets immediately relayed to everyone else in the community.