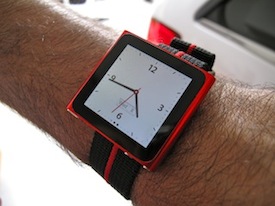 You knew someone was going to do it, it was just a question of time. The real question is, does the iPod Nano actually work as a wristwatch? Well, that depends on your definition of “works”.

There are a few problems right off the bat. First off: battery life. The Nano only has about 8-10 hours of battery life in continuous use, which is less than desirable for a wristwatch. I mean, who wants a watch that you have to recharge every night? Next off, a lack of water resistance. The Nano is not intended to be used near water, and your hands generally are near water more often then you realize. Finally, as a fashion accessory. I like a chunky watch as much as the next guy, but the new Nano is still a little large to wear on your wrist.

If your heart is set on wearing one, you can pick up a Maratac watch band for about $17, and stick it behind the clip on the Nano. I actually have two Maratac bands; they are high quality and look great with a real wristwatch. With the Nano? That’s your call. I think I’ll pass.