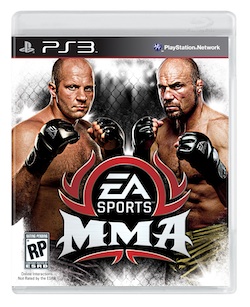 The demo for EA’s upcoming EA Sports MMA will be released on September 28 for both the Xbox 360 and PS3. There will be four fighters to choose from, one of which was badly exposed at the most recent Strikeforce event and another of which isn’t even a part of Strikeforce anymore. Banging on all cylinders, I see.

The fighters included in the demo will be:

• Alistair Overeem, the current Strikeforce heavyweight champion (who has a great, ongoing documentary on his Web site)

• Bobby Lashley, the former WWE Superstar who was pretty much embarrassed at Strikeforce Houston a few weeks ago

• Jason “Mayhem” Miller, who’s actually pretty good and has a great entrance (when Strikeforce actually lets its fighters have entrances)

• Jake Shields, who has recently signed with UFC

Judging by the press release, Randy Couture, probably the biggest “name” in the game (besides Fedor and Overeem), has to be unlocked by “sharing the demo with friends.” I don’t know what that means.

Incidentally, Overeem won’t be fighting in Strikeforce for the next few months seeing as though he’s committed himself to fighting in the K-1 tournament this autumn.

The game will be released on October 19 for the Xbox 360 and PS3, and you really do wonder how many copies EA plans to sell. UFC is big in this country, not MMA, and considering that the latest UFC game sold just about 18 copies, well, I can’t see EA Sports MMA exactly lighting up the sales charts.

Which, of course, backs up what I said several months ago, that EA Sports MMA is merely a tech demo for EA while it waits to purchase the UFC license.