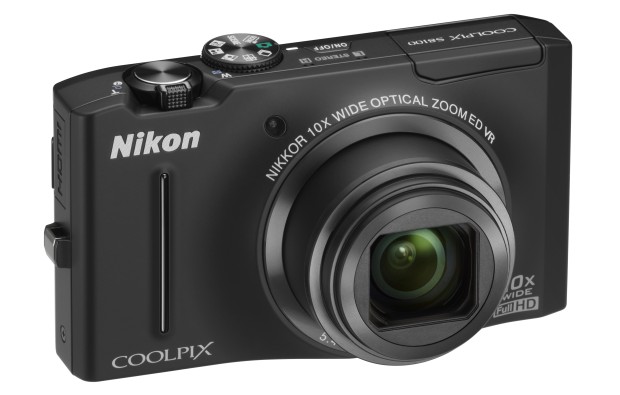 Ths S8100 is the cheapest of the three cameras being released by Nikon today, and although at $300 it’s starting to get into the luxury range for point-and-shoots, I think it looks like a pretty solid deal.

You’ve got the usual 12.1 megapixels and HD (1080p) video, but the S8100 also does some interesting photographic tricks. It can capture five shots in a row at 10FPS, which is… disappointing in one way, but pretty awesome in others. It’ll be handy, anyway. Hopefully you can select to shoot more shots at a lower resolution. It’ll also shoot slow-motion video at 120FPS — that’s no Casio Exilim, but it will reduce events to a quarter of their normal speed.

It’s also got a 10x zoom which it says is fast, but they don’t list the F numbers so we can’t be sure. It goes up to ISO 3200 and there’s stabilization, though, so you won’t have to rely on the flash too much. 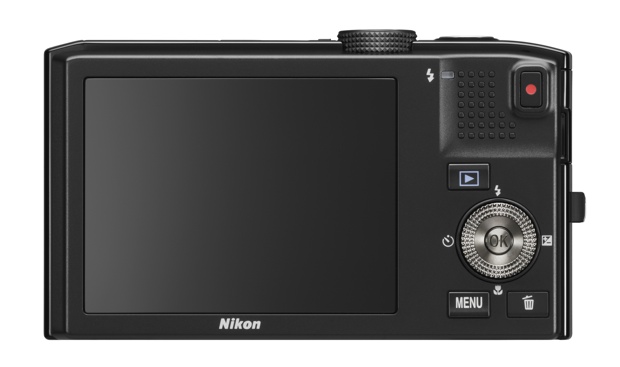 Again, at $300 (available later this month) you’ve got a lot of options, but sight unseen I’d recommend this camera on the strength of the Nikon brand and unusual features. Here’s the full press release, if you like that kind of thing:

To help capture moments that are gone in an instant, the COOLPIX S8100 not only features high‐speed
shooting at five full resolution frames at up to 10 frames‐per‐second (fps), but a pre‐shooting cache that
records up to two shots before the shutter‐release is fully pressed.  For extremely fast action shots, the
S8100’s Sports Continuous mode records up to approximately 120 fps.  With Subject Tracking, the S8100
automatically tracks a designated subject by activating autofocus (AF), enabling the user to capture the
best moment confidently. The S8100 also adopts Nikon’s exclusive EXPEED C2™ image processing
engine, which is customized to each COOLPIX model to further drive enhanced performance,
outstanding image quality and HD video.

Staying true to the legacy of the Style Series, the S8100 empowers users with serious performance and
image quality, while remaining stylish and compact.  Equipped with a 10x Optical Zoom‐NIKKOR ED glass
lens (30‐300mm, 35mm equivalent), the COOLPIX S8100 allows the user to get close to the action, even
when recording a movie in Full HD (1080p).  For that family film producer, the S8100 features one‐touch
recording, optical zoom and stereo sound recording while filming for an enhanced user experience.
Additionally, users can perfect their movies in‐camera with a new editing function or snap still images
while recording.

“Our portfolio of compact digital cameras is designed to equip photographers of any level with the
features and functions they will need for various shooting situations in a portable, compact body,” said
Bo Kajiwara, director of marketing, Nikon Inc.  “The COOLPIX S8100 blends superior high‐speed and low‐
light performance with a sleek and stylish design for a camera that is not only ready to go when you are,
but one you are proud to show off.”

Advanced Technologies for Beautiful Nighttime Shots
The COOLPIX S8100 features a 12.1‐megapixel backside illumination CMOS sensor, which enables
exceptional image quality even when shooting in low‐light settings.  This CMOS sensor lends itself to
enhanced shooting functions in dark situations, including the advanced Night Portrait mode, which
reproduces night scenes and indoor portraits as the user sees them while reducing image blur.  The
Night Portrait mode combines consecutive shots of the background while the subject is taken using the
flash, allowing challenging night scenes to be easily captured during handheld shooting and eliminating
any subject movement.  To further help deliver crisp, sharp photos, the S8100 features a 4‐Way
vibration reduction (VR) Image Stabilization System with ISO settings up to 3200.

Other functions benefitting from the lower noise and exceptional image quality of the new CMOS image
sensor include an advanced Backlight shooting function with an in‐camera high dynamic range (HDR)
function, which merges images of the same scene to achieve a single image with a broad range of tonal
detail for a frame‐worthy shot.  Additionally, the S8100’s advanced Night Landscape mode combines a
series of five consecutive shots taken at a fast shutter speed into a single image with reduced noise for
when taking handheld shots.  From romantic candlelit dinners to capturing the bright lights of New York
City at night, the COOLPIX S8100 ensures that no low‐light moment will be left in the dark.

Creative Versatility
The COOLPIX S8100 helps unleash the user’s photographic potential with enhanced shooting and editing
functions, including a new Mode Dial conveniently placed next to the shutter‐release button for quick
and easy access to shooting modes.  The COOLPIX S8100 also features the Creative Slider, which
simplifies adjusting brightness, saturation and color tone in‐camera.  Other in‐camera editing functions
include Quick Retouch and D‐Lighting, giving users the ability to adjust their images during playback.

To further help the process of composing and sharing photos and movies, the COOLPIX S8100 boasts a
3.0‐inch ultra high resolution (921,000‐dot) Clear Color Display with a wide viewing angle and anti‐glare
coating.  Additional must‐have features in the S8100 include 17 scene modes, including the Scene Auto
Selector, which automatically recognizes the shooting situation and adjusts camera settings accordingly
for great photos in any environment.  For outstanding portraits, the S8100 features Nikon’s Smart
Portrait System, which incorporates a series of automatic functions including In‐Camera Red‐Eye Fix™,
improved Face‐Priority AF, Blink Warning, Smile Timer and Skin Softening to flatter even the most
camera‐shy subject.

Availability and Pricing
The COOLPIX S8100 will be available late September 2010 for $299.95* MSRP in a choice of attractive
colors including black, red and gold.