Over the last 24 hours there’s been a significant buildup to a special Google event that’s being held this morning at San Francisco’s Museum of Modern Art. The search giant is clearly excited: Google featured a kinetic logo on its homepage yesterday, and they now have a logo that went live last night hints at live updating search. The event is about to kick off, and it’s sure to bring some big news. We’ll be live blogging it below and will also be writing individual posts calling out the biggest news. You can watch a live stream of the event here.

Update:: Here are our posts detailing the day’s major news:

Periodically we do ‘State of the Unions’

“What we do at Google is one part art, one part science.” “Today we’re going to talk about the importance of fast”.

Marissa Mayer has taken the stage. “Obviously we have a really big announcement, but first…”

-In past few months have passed over 1 billion users on Google each week.
-In 2010 have rolled out more than 500 changes to ranking and UI. 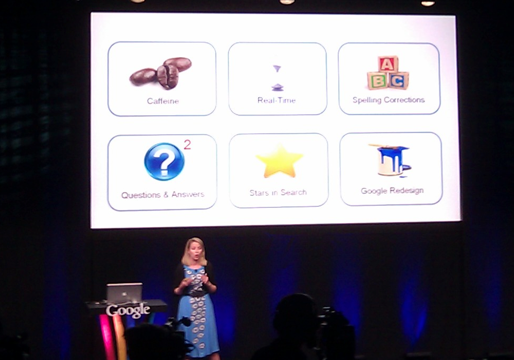 “We see today as a fundamental shift”.

Now talking about Woman with a Hat, a piece featured at MOMA. If you were to look for information in the 30’s, you’d spend half a day looking up information. In the 50’s you might be able to call a librarian, you could get the information in around half an hour. 1995, you had CD-ROM encyclopedia, you could find this information in a matter of minutes. But it was static information.

It takes a user on average around nine seconds to enter a search query into Google. Serving results takes around 300 ms from Google, plus 800 ms total in Network time. Takes around 15 seconds to select a result. A search takes 25 seconds.

At Google we think we have a faster way. Google Instant. And that’s what we’re launching today. Gets search results as you type so search is interactive the whole time you’re typing. Google Instant looks like normal Google search. But as you start typing, you see results — you don’t have to hit enter. You can hit ‘tab’ to complete a word. 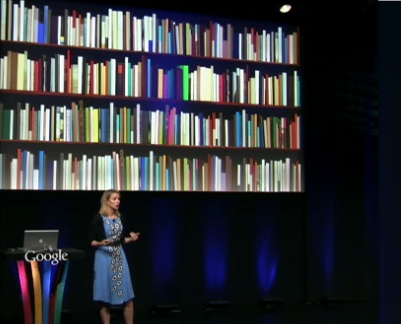 You can use up and down arrows to jump between queries. “A lot of people think that Google Instant is search as you type. But it’s actually search before you type.” Instead of searching for exactly what you entered, it searches for the auto-completed suggestion. So you can see results when you’re only a few characters into your search.

In 2000 we thought this idea of searching before someone typed it was our April Fools day joke.

Google Instant will be available on Chrome, Firefox, Safari, and IE 8. Will be rolling out over the course of today. Starting today you’ll get this as part of Google.com. Rolling out internationally over the next week to UK, France, Italy, Germany, Spain, Russia.

We estimate this will help Google users save two to five seconds per query. That adds up across all users. “11 hours saved. Each second.”

Hit “w” — one keystroke. And you get the weather instantly. (audience claps).

Say you want to do a search for The Gril with the dragon Tattoo, but can’t remember the title. Start typing “the gi” and you’ll start seeing results. Gray text shows what Google thinks you’re looking for. “It’s not quite psychic but it is very clever”.

Third feature is scroll to search. After you type in a few characters you can hit up and down to jump between each suggested query with results showing up instantly.

Sneak preview of something coming this fall. Working to get this on mobile. Typing on phone is slower, so feedback is more useful.

Ben Gomes, Distinguished Engineer at Google, is talking about the engineering challenges. First challenge is user interface.
-We wanted to give feedback as you typed your query. If you type “bike h” you get queries that aren’t helpful — partial queries were a waste. So we figured out we had to do autocompleted queries.

Early iterations it was distracting to show results as you type. We tweaked it then dogfooded it, and it was very positive. Eventually did experiments with millions of users. Use eye tracking in lab. People tend to look at search box until the gray text shows what they’re looking for, and they immediately look at results.

Did extensive server and Javascript optimizations. Also had to optimize for load. First optimization: prioritizing searches differently. Next, user state — server keeps track of what browser already has, or what is already being done on another server. Finally is caching system.

Project started with one engineer a year ago, team doubled every six weeks thereafter.

Mayer is back on stage. Interactivity, comprehensiveness, understanding are keys to search. We feel Google Instant is a quantum leap forward in search.

Q&A:
Q: When will this be in the browsers? Google Chrome, etc.
A: Something we’re working on. Next few months.

Q: Impact on AdWords? A lot of impressions, are those counted as impressions?
A: No change in how we serve and rank ads. In terms of counting impressions in AdWords. Google Instant changes the way people search, so we do our best to calculate what a search is. We’ve added a three second pause as an impression. Also if someone clicked on a result/ad on the page. We operate on CPC basis, clicks are largely preserved.

Q: How does this fit into user search history?
A: This operates as you’d expect. Queries where you click will be shown. As will queries where you pause for more than 3 seconds.

Q: Is there a blacklist?
A: We care a lot about child safety, these kinds of issues. Had to think a lot about this. Same policies filtering for violence, hate, and pornography. If you’re typing something that may not appropriate we don’t show the results until you press enter.

Sergey Brin: I’ve been astounded by rate of innovation. Want to make Google third half of your brain. I do think it’s a little bit of a new dawn in computing. Things were fairly stagnant with respect to desktop for a decade or so. I’d say over the past several years, the technology coming of age, people being open minded to trying new things. Lots of exciting work going on.

Q: SEO.
A: Ranking stays the same. Behavior may change over time. Will understand much better over time.

Q about privacy.
Brin: We think a lot about privacy as a company. We spend a lot of time thinking about, making sure we’re secure. I don’t think Google Instant is any different in that respect.

Q: How many users haven’t liked this?
A: Some users decided to turn it off. We have a switch that lets you. Very small percentage. Overall really happy with number people who kept Instant on. Caffeine makes index refresher, we had to come up with a very advanced caching strategy.

Q about making it faster.
A: We’re happy now but I’m sure we’ll go back later to make it faster. “You aint seen nothing yet”.