It went by largely unnoticed, but directory services provider WhitePages launched a social buying website called DealPop last July, entering a field played by many notable up-and-comers such as Groupon, LivingSocial and Yelp.

Initially, DealPop was only available in Seattle, but the site is expanding to Los Angeles today and to San Francisco in the next two weeks.

The company has bigger plans for the site than city-by-city expansion too, so its competitors better take notice.

The reason all group buying sites should keep a close eye on the venture, regardless of the lackluster reception by the media, is the sheer size and reach of WhitePages.

The company offers an exhaustive suite of free mobile and Web services that enable people find and connect with each other as well as businesses throughout the United States.

According to WhitePages, its directory offers one-click access to more than 200 million adults, and powers more than 2 billion searches on over 1,500 partner sites including MSN, Ask.com, and the United States Postal Service.

Its DealPop subsidiary, specifically, will build off the 100 million local and business searches conducted by some 20 million people who visit WhitePages.com and 411.com per month. 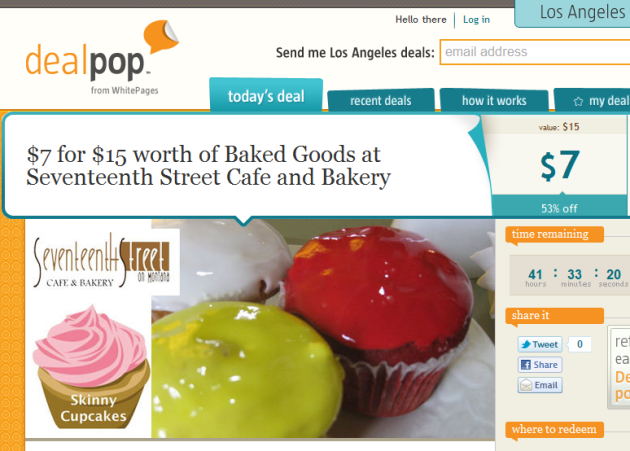 It’s worth noting that DealPop isn’t necessarily a group buying site, as every user gets a deal – there is no minimum of people required for a deal to get unlocked. DealPop has also created a point system that allows members to earn points on future purchases when they share a deal with someone via Facebook, Twitter and/or email who then signs up and purchases that deal. There is no limit on the number of DealPop Points that members can earn.

Two months in, the company is content with the metrics in its home turf of Seattle, where listings have grown fivefold since the launch. WhitePages says over 50% of the people who’ve signed up for DealPop to date have already moved to purchase their first deal, and that every single merchant that has offered a deal on DealPop so far has requested a second run.

Curious to see if they’ll make strides in the rest of the United States as well.