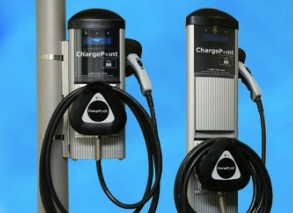 So far, Coulomb has set up stations (that can power any plug-in vehicle) in cities worldwide including: New York City, Orlando, Detroit, Amsterdam, Sydney and Dublin. The charging systems installed are for consumer and fleet use, both, and run on the company’s proprietary networking technology and software, a system called the ChargePoint Network.