Launched at TechCrunch Disrupt NY a couple of months ago, VideoGenie is on a roll, says founder and CEO Justin Nassiri.

VideoGenie essentially aims to transform the way consumers and brands connect through video by making it super easy for marketers to collect, review and deploy unscripted video customer testimonials.

Since launching at Disrupt in New York, VideoGenie says it’s been on a tear, growing sales, building the team and optimizing the product offering. And now that its platform is being used by multiple early-adopting companies, the startup was kind enough to share some preliminary data with us.

Recently, the startup launched a new and improved video player to optimize their clients’ video playlists through a custom-built algorithm, and Nassiri tells us early results are stunning. Ecommerce site Swoopo is a client, and the companies have been working closely together to evaluate the effectiveness of the platform, and early metrics are indeed promising.

According to VideoGenie, the average viewer watches 9 different testimonials on the platform, which translates to over 100 seconds of video per company. Furthermore, every time a new video gets published, viewership increases by over 40 percent, which means people actually look out for new content. Finally, and perhaps most importantly, VideoGenie says campaigns results in over 32 times more videos viewed than identical ones being run on YouTube.

Based on the feedback at Disrupt, the company says it has “aggressively moved” into three new areas that define its new (VG2) platform. Some of those are already operational, while others are due for imminent release:

Similarly to typical dynamic ad targeting, VideoGenie will use “what it knows” about the user to make sure the thumbnail and the first video are most likely to be clicked. The nature and degree of targeting is fully under the control of its clients.

If they use Facebook Connect, VideoGenie can first check if a site visitor has a friend on the social network who has submitted a video and serve that one up first. If not, VideGenie can look for other social, demographic and/or behavioral matches.

Each video receives a so-called “VG Score” which is tied to the influence of both the person and the testimonial itself. It’s based on a composite of the submitter’s profile, testimonial quality, viewer acceptance, playback metrics, sharing dynamics and more.

Each testimonial is constantly recalibrated and served accordingly. The “VG Score” can also be extended to clients’ e-commerce analytics, allowing for tracking of influence in aiding consumers through the product selection and purchase process.

The next step is to distribute videos via social networks and social communications. Once a video is approved by its clients, VideoGenie will send submitters an email, in which he or she gets encouraged to alert their friends. 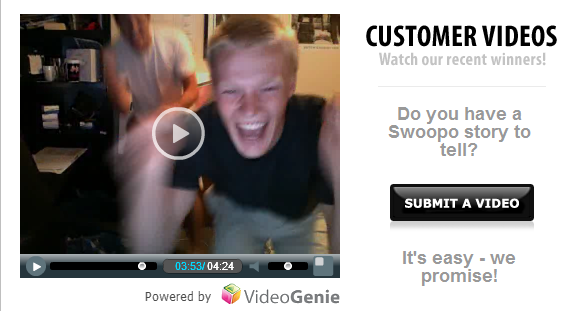