There is no shortage of gift card marketplaces on the web, with startups like Cardpool, Gift Card Rescue, and Plastic Jungle all promising to rescue your unused credits or sell discounted cards. However, these sites typically require buyers to wait several days for the physical arrival of their gift cards, frustrating users who want to use credits immediately for online purchases.

Cardpool, a Y-Combinator startup founded by Anson Tsai (formerly of Anywhere.FM) and Timothy Wong, is trying to change that. Starting this morning, Cardpool will give current members the option to purchase instant redemption gift cards. While the site will still send the physical card via snail mail, a user gets immediate access to the card’s codes for online use.

It’s a natural— if not long overdue— evolution of the gift card market. 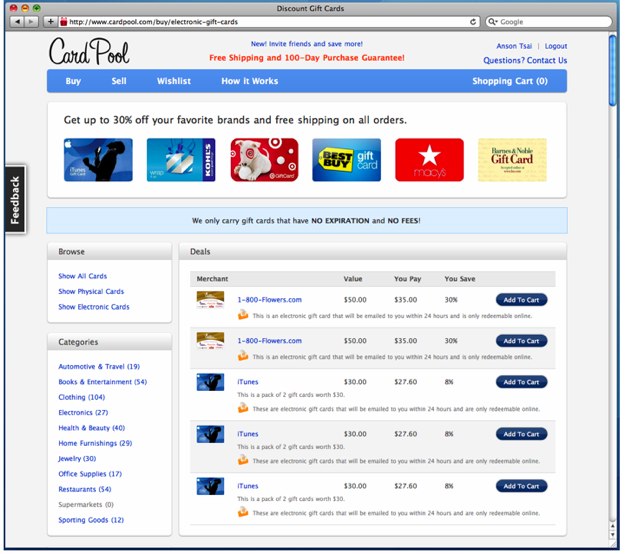 With the mainstream consumer becoming more web savvy and spending more dollars online versus offline, Tsai says he has been fielding more complaints from users who could not take advantage of time-sensitive web deals (because they could not purchase/receive gift cards on time). It may seem strange that such an obvious pain point has not been properly addressed in this massive secondary market; however, Tsai says Cardpool and its rivals have been cautious because of security issues.

Under the traditional model, buyers and sellers were pegged to a physical address, limiting fraud. Thus, with immediate, online transactions, the opportunity for fraudulent activity (i.e. the use of unauthorized credit cards to purchase gift cards) increases. In response to these security concerns, Tsai says Cardpool has devised a system to carefully monitor transactions and detect patterns.

If Cardpool can successfully execute and capture this market, the startup will have a major advantage over its closest rival, the well-funded Plastic Jungle, which has raised $13.4 million in the last two years. Cardpool, founded in 2009, has reportedly raised significantly less with just one undisclosed seed round. However, the company has some key super angel backers in its corner: The latest round was led by Jeff Fluhr, founder of StubHub and included Ron Conway, Max Levchin, Mitch Kapor, Alfred Lin, Naval Ravikant, Chris Dixon,Chris Sacca, Josh
Felser, David Samuel, James Hong, Paul Buchheit, Ramit Sethi, Nils Johnson, and Adam Smith.