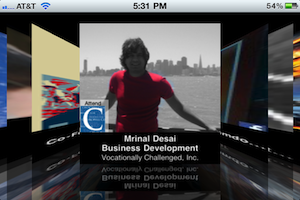 The term “social network” is of course synonymous with online networks like Facebook. But think about what you’re actual social life is like for a second. Are you really closest to the people whose items you “like” the most on Facebook? What about the people you @reply or retweet on Twitter? The people you reblog the most on Tumblr? If you’re anything like me, probably not. Instead, the best indicator of who I actually interact with socially the most in real life are the calls I make and the texts I send — it’s all mobile interaction.

I’ve written before that I think location is the bridge between social networks and actual social life. But why do we even need that bridge? Why are so many startups content to build on top of the Facebook or Twitter social graph, when a lot of them can access your actual social graph in your mobile contact book? We’re seeing more and more apps go “mobile first, web second” these days, and that’s likely to increase going forward. This means that they start as services on mobile devices. So again I ask, why not just get to your actual social graph through your contacts there?

Sure, many do that to some extent already. APIs for Android and the iPhone give you access to contact list information to varying degrees. But most startups are still approaching that idea as a secondary tactic after they’ve hooked in your social graph through Facebook or Twitter. But I think we may start to see some that go right to the heart of your contacts on your mobile device. In fact, I met with one in the making last week, addappt.

While they’re still building out the product, the core idea of Addappt is to connect people through their contact lists (in this case, on the iPhone). Specifically, their app scours your contact list to see which of your friends are signed up to go to various upcoming conferences. But you can easily see this concept transferred to any number of social utilities. “When was the last time the address book saw any innovation?,” is the way co-founder Mrinal Desai puts it. And he’s right.

It seems that companies like Apple and Google are sitting on a treasure trove of actual social data with these contact lists. Calls, texts, emails, it’s all right there. Google obviously has tried (and failed) to build a social graph through your email contacts before — but they went about it wrong, and they did so on the desktop. Mobile is the key to this.

Currently, we’re also seeing Apple also struggle in its first real attempt at social networking, with iTunes Ping. Their network is way too closed to be of much use — but at least they get that mobile should be a component of it.

But imagine if Apple built social tools right into your Contacts app? Maybe it would start with short status updates (maybe this would even pull in tweets), and then it would move to something like instant messaging. Then imagine if they did something with location? All of this would be opt-in, of course, but it could be very powerful.

And think about FaceTime. It’s an amazing product, but it’s far too hard to use because you never know when someone else is available to chat. Apple won’t accept the FacePlant app which solves this, so I have to believe they’re working on their own solution. The Contact app would be perfect for this. You load it up and see who is available to FaceTime.

Obviously, using your mobile contact book isn’t ideal for all types of social applications. But for the ones you want to use with just your closest friends: location, photos, short messages, events — it could be a killer set of data.