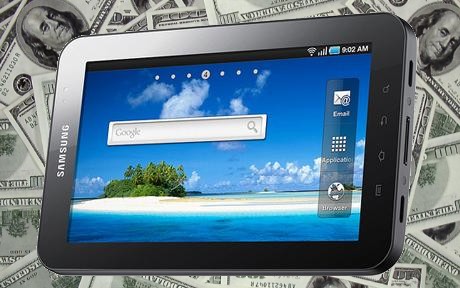 The Samsung Galaxy Tab is going to sell well. It won’t be a blockbuster like the iPad, but it should still do alright mainly because it’s the first consumer-worthy Android tablet. Samsung can even price the tablet well north of the iPad’s $500 starting price. It will not matter. People will buy it even if it’s, I don’t know, $800. You might not, but there are enough Android fanboys that will.

Rumors have popped up over the last 24 hours about the Tab’s price. Some European retailer’s pricing has leaked out although Samsung is saying it’s all speculative because the official pricing hasn’t been announced just yet. But still, it makes you think. The pricing ranges from €699 ($890) to €799 ($1,020) for the 16GB and 32GB respectively. Remember, the Galaxy Tab comes with a 3G modem and there likely will not be a WiFi-only model because Google requires cellular capability for the Android Market. But for a quick minute, forget that the iPad offers a bigger screen and twice the storage for the same price. It doesn’t matter.

The Samsung Galaxy Tab is something special. It might not be special enough to be called an iPad-killer, but seems to be everything we want in an Android tablet. It’s sexy, powerful, and versatile. In fact, it makes me hopefully that Android tablets have a chance to sneak some marketshare away from the iPad. It’s that nice and why Samsung can pretty much price it however the company wants. But the pricing will write the Tab’s future.

The iPad was an instant hit because of its near-impulse $500 price. Of course Samsung will move more Tabs if the price is lower, but more importantly, a higher price will push the tablet away from the mainstream crowd and into a niche market. That’s probably fine for the Tab itself as there are no doubt enough rabid Android fanboys that have waited for a proper tablet to make it ultimately successful, but the niche market isn’t where Android tablets deserve to be.

Android is finally becoming a proper mobile OS. I still feel it’s more “work” living with an Android phone than an iPhone or BlackBerry device, but the sheer capabilities are being refined and better packaged as manufacturers learn the system. Eventually Android will be superior to even iOS, but consumers are fickle and for better or worse, it’s up to the Tab to show the world that an Android tablet can work.

Samsung’s been quiet about the Tab’s price and launch details, but it seems that the Tab will get a world-wide launch. It’s being showcased at IFA in Europe and Samsung is a major force in Asia. Even here in the states there’s been rumors that it will launch sometime soon on CDMA carries of Verizon and Sprint. No doubt the Tab will be available for direct purchase in Europe and Asia just like most cell phones, while it seems as if it will be available via carrier subsidies in the US. It just feels as if Samsung is prepping for a multi-market launch, which is a bit different from the iPad’s slow roll-out and probably possible because of the Tab’s lower sales estimates.

Let’s not forget Samsung knows what it’s doing. High or low, the Galaxy Tab will probably be priced right. Now, this price might not be right per your expectations, but rather the bean counters at Samsung who know a little more about these things than us.