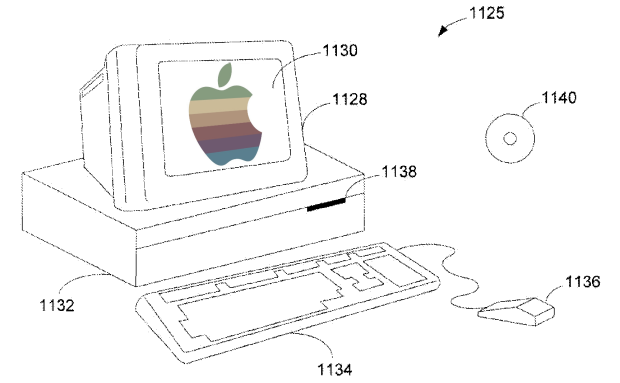 Apple has been granted nine new patents, and I thought I’d take a look at the claims therein and see whether they match up to the descriptions, and whether they seem (to this humble blogger) like realistic items for which to gain exclusive rights. I’ve included links to all the patents, but the USPTO office is behaving strangely, and often returned an error when I tried to pull up documents. Those guys ought to claim a method to buy some new servers, whereby I don’t have to submit the patent number five times before it comes up.

I’m not going to get in the habit of analyzing in detail every patent that comes our way, but in light of recent lawsuits and all the noise being made about software patents specifically, it seems worthwhile to take a closer peek now and then.

7,788,582 (filed September 6, 2005): This appears to be a patent for part of the cascading “search assistant” in iTunes, which lets you narrow your search to one of several categories (music, videos, podcasts, and “all” are claimed), and presents dependent parameters like artist, author, etc., to further limit search results. It’s no secret that many popular players have adopted this type of search, but if Apple decides to take them up on it, it may be that trivial changes or improvements will be all that is warranted to make others’ search methods distinct.

7,788,248 (filed March 8, 2005): This patent claims a method for automatically displaying search results when a user is typing into a search box if the user pauses or hits space. There are also claims for UI elements for setting parameters like search delay manually. The claims list is quite long, but much of it is boilerplate pertaining to including the keyboard, computer, and code in the patent. Obviously Google and others have been using this for some time (Apple in fact uses Google as their example in the illustrations); I wouldn’t be surprised if live search results have appeared in other, earlier patents. Apple’s appears to be limited to “an internet search engine,” but does that refer to any search engine accessed through a browser, or what? If this is a piggyback service offered through Safari, it would make more sense (i.e. automatically submitting search queries multiple times client-side instead of server-side displaying results for partial input).

7,788,656 (filed December 15, 2005): A technical patent for reducing GPU or CPU load when performing transformations on an image. Essentially combines two filters or other operations, eliminating redundant calculations and storage. It appears to combine to produce a third program program procedurally. This would accelerate color corrections in video and photo editing. Pretty cut and dry.

7,786,975 (filed December 23, 2005): The patent for the iPhone’s inertial scrolling system. The claim is essentially for simulating accelerative and decelerative friction on an object based on input from a touch-sensitive display, plus some parameters for allowing it to handle this or that type of non-ideal gesture. Obviously inertial scrolling is in use in many other applications now. I think it may be easy to get around Apple’s implementation: acceleration of scrolling through lists or windows has been in place for quite a long time, and passing user input from a touch-sensitive device to this other inertial scrolling method seems to me a distinct method based on what is claimed (again, not a lawyer). 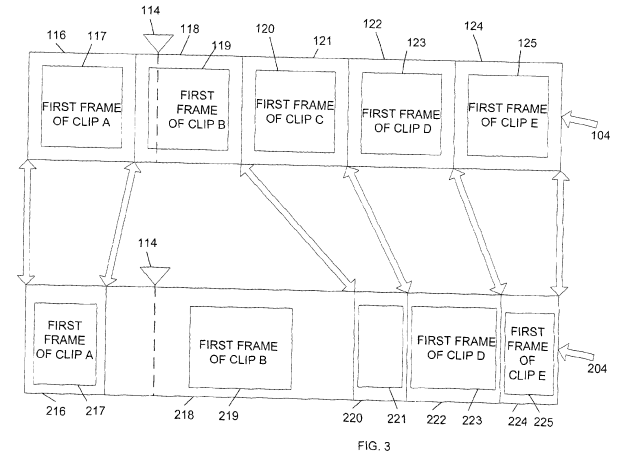 7,788,605 (filed May 22, 2003): Claims a method relating to iMovie’s clip-based display, where the playhead determines what is displayed in the thumbnail and also indicates where in the clip that thumbnail image is taken from — or something like that, anyway. Pretty straightforward.

7,788,585: More editing-related claims, this time for a user-friendly way to do split editing — i.e. separately editing video and audio from adjacent or overlapping clips. Nothing too interesting here. 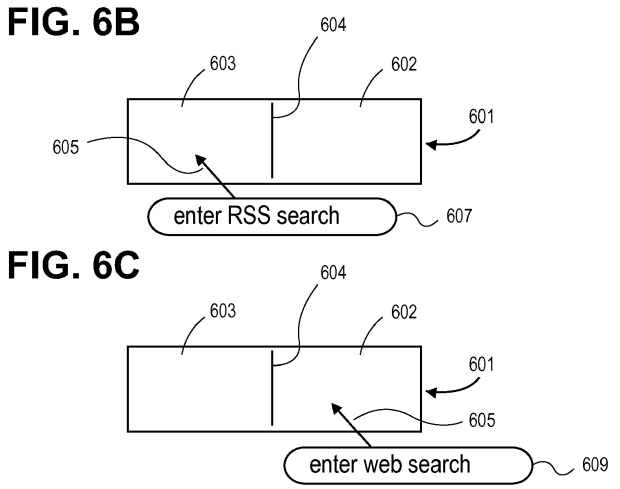 7,788,594: This is actually a great idea, which I haven’t seen implemented anywhere. The idea is a search box which, depending on where you click within the box, it searches different things. It basically just skips using a pulldown menu to search something specific; imagine if you clicked on the right side of the Google search box to make your search be an image search, and on the left side to make a regular search. I’m actually surprised not to have seen this around at all.

7,788,599 (filed July 28, 2006): This one is ridiculous. They appear to have been granted a patent for an unbelievably simple and fundamental way of displaying data. Cell-based menus for navigating a hierarchy. Isn’t this essentially a patent for a menu bar? They’re claiming something that’s been in constant use since the early 80s. 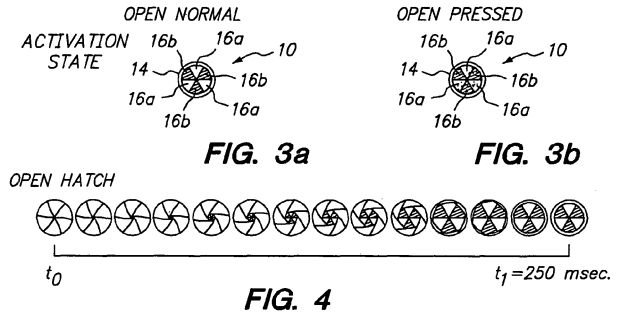 7,788,604 (filed November 3, 2004): Not quite as dodgy as the last one, but still questionable, if you ask me (though why would you?). This is a patent on an icon changing to a new state on mouseover, and not being clickable until it has fully changed to that second state — and upon being clicked, it goes to a third state. This kind of thing has also been a staple of graphical menus for a long, long time. In fact, I believe I programmed something like this into a Hypercard stack when I was 10 or 11. If I find that stack — prior art!

I’m guessing these are only a few of hundreds of similar patents Apple has regarding UI items for OS X and iOS. It’s probably not an unreasonable assumption to consider this group a representative sample: the rest probably shares a similar proportion of well-deserved, questionable, and absurd claims. Of course, what matters is whether Apple will be satisfied to let these lie as protective against exact duplication, or whether they will start suing people for using rollover graphics in their icons. It’s worth noting that most large companies file many patents and likely (as a commenter notes below) also have good and bad ones. Apple’s just happened to be granted in a bundle this week, so I thought I’d examine them.

Again, I am not a lawyer, and these are just my impressions on looking at the claims and illustrations provided. I didn’t look into the referenced patents and whatnot, but I felt my summary of the claims might actually be more informative than the baked-in descriptions.