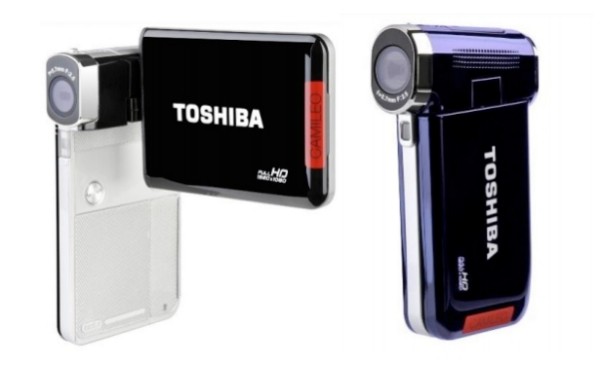 Toshiba has dropped a pair of new camcorders at IFA, both of the genus Pistolgrippus. The P20 is the chubbier of the two, though that’s not saying much, since the S30 is only 19mm thick. Once you’re past the point where these things slip into your jacket pocket, though, a millimeter here or there doesn’t really signify much. Good for them, though.

The P20 is the lower-end of the two, not being as thin and only shooting 5-megapixel photos, as opposed to the S30’s 8. Both, however, have 10x optical zooms packed into those tiny lenses. I believe they are also both 1080p like the more traditionally shaped H30. And they also both have nice 3-inch touchscreens.

Those differences don’t seem so important to me, and the fact is they’re not priced very far apart. It comes down to whether you like the form factor of the S30 more and are willing to pay a small premium for it. Right now only British pricing is available; the P20 will be £119 when it arrives in October, the S30 will be £139. That corresponds to ~$180 and ~$210, but US pricing may differ.