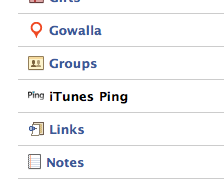 There seems to be some confusion out there right now about iTunes Ping, Apple’s new music social network, and Facebook. Some people seem to think it was never a part of iTunes, that Apple decided against connecting; while other reports say they think it was at one point integrated, but that it wasn’t working and has since been removed. I can tell you for sure that yesterday Facebook Connect was a part of Ping — because I used it.

When I first loaded iTunes 10 yesterday and started up Ping, connecting with Facebook was the first thing I did to find friends. At first, I will say that it didn’t work. I hit the Connect button, entered my credentials, and nothing happened. But I tried again and it worked perfectly. I found a handful of Facebook friends who had just started using Ping as well and connected with them.

Further, looking at my Facebook account, I’m still connected to Apple’s Ping app there. And so are 27 of my Facebook friends, currently. Apple has removed the implementation from iTunes for right now, but the app is still live and connected on Facebook.

I also spoke with some Apple representatives at the event yesterday, and they confirmed that the Facebook Connect implementation was only for pulling your friends in to Ping. No other data was being transferred, I was told.

The app page on Facebook seems to confirm this:

This application makes it easy to find and follow any of your Facebook friends who also use iTunes Ping.

So why did Apple remove it? Who knows. It could have been buggy (as I said, it was yesterday), or maybe Facebook didn’t like some aspect of the implementation and asked iTunes to rework it. So far, neither side is talking.

I do think that Ping has a nice and simple social model which lets users follow, friend, or lurk. Compare that to Facebook, which is a mess or privacy settings.

But again, the connection between the two was definitely working yesterday. But it only about finding friends, no other data was being transfered over.

Facebook believes in connecting people with their interests and we’ve partnered with innovative developers around the world who share this vision. Facebook and Apple have cooperated successfully in the past to offer people great social experiences and look forward to doing so in the future. 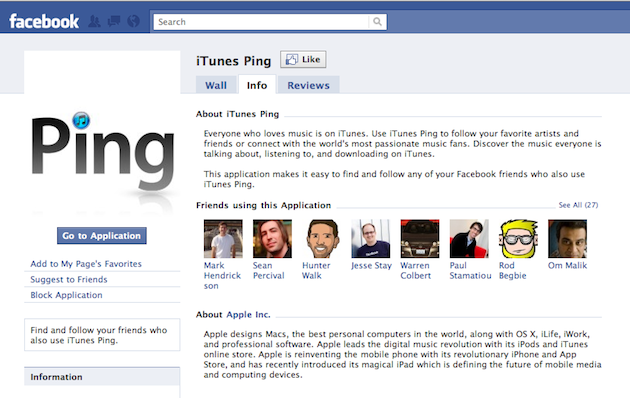