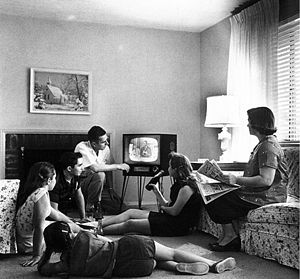 I’m going to just assume that if you’re reading this, you’re familiar with torrenting and the like. It’s pretty much commonplace now and while I’m not here to argue its legal ground, it’s a fact that many people get their TV and movie content this way. Yes, it’s illegal, but the fact is there are products specifically geared for that market. The Apple TV isn’t one of them.

Oh no, the Apple TV is for those on the up and up. It’s clearly for those that for one reason or another, want an easier or legal way to get on-demand content on their HDTV. I can’t think of a single device that makes renting TV shows and movies easier. The Roku? Well, it has Netflix and Amazon Video On Demand, but even those require one or two more steps than the new Apple TV — and you can’t get the latest TV episodes, either. Its dead simple interface and feature set are the Apple TV’s main draw and, I suspect, why it will be successful.

It’s actually a smart move on Apple’s part. They are clearly going after the mainstream here. The Apple TV will probably sell like mad come Christmas. It’s $99 and brings a person’s entire iTunes collection to a the big screen. I wouldn’t be shocked to see stores like Best Buy sell it alongside iPhone.

But unless some devs open up the device, it’s not for downloaders or advanced users. The supported media formats are far too limited and everything has to be streamed through iTunes Home Sharing. There doesn’t seem to be any way for it to access local network shares directly, which pretty much kills the appeal for that demographic.

That’s fine; there are several devices that already serve that market, from the Western Digital TV to the Seagate FreeAgent Theater+, to the dozens of other devices available. Want something Apple TV-ish? Wait for the Boxee Box this coming November. That seems to be the device that will fill the gap between versatile and mainstream.

Personally I find the new Apple TV boring, but I’ll admit it’s not for me. I left my Mac behind when Windows 7 came out. Moved my photo collection from iPhoto to Picasa and get my music from RDIO. All my videos and TV content are served up from a TiVo. I’m set, but the Apple TV should satisfy most mainstream consumers’ need for on-demand content. Everyone else should continue lurking in the shadows.