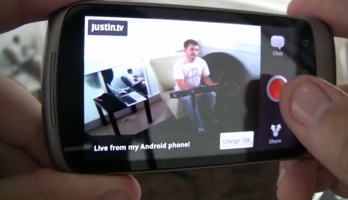 The Android app allows you to record video from your phone and broadcast it directly on Justin.tv. The company is serious about mobile. CEO Michael Seibel believes mobile apps can help solve some of the fundamental barriers holding back live video today.

Competitors Qik and Ustream already have mobile broadcasting apps for Android and the iPhone. Qik’s Android app is even built into the HTC EVO.

While Justin.tv may be a little late to the party, it comes bearing some new gifts. The Android app takes advantage of hardware video encoding, which drains the battery less. It also adjusts the bitrate at which the video is uploaded, depending on the strength of your wireless connection.

The app is designed to be a complete experience. You can download it, register for a Justin.tv account and start broadcasting without ever going to the website. It has three buttons: record, share, and chat. Once you hit record, you start broadcasting live. It lets you record in landscape mode as well as portrait.

You can share a link to your video with your friends on Facebook or Twitter, and when the the broadcast is over that link redirects to a saved archive version. Every video you shoot from your mobile phone is automatically saved. You can also chat with live viewers right from the mobile app as you are shooting your video. All of these features are unique to Justin.tv.

Below is a video demoing the new app with a very deep voice-over by founder Justin Kan (I think he’s been watching too many movie trailers):