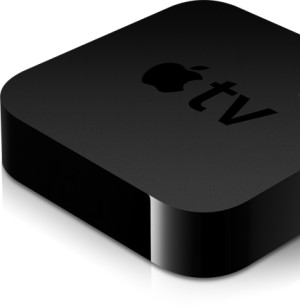 Forget the iTV name, the refreshed Apple TV is still called the Apple TV. But that’s about where the similarities end. The entire system from the form factor to the UI is different; even the entire concept is different. I think we can officially say Apple is taking the Apple TV and the whole streaming market seriously now. It’s no longer just a hobby despite what Steve says.

The new model is dramatically smaller than the old one — 1/4 of the size actually. It features 802.11n built in with HDMI, Ethernet, and optical audio on the backside. The power supply is even built-in. No more power bricks, people!

Just like the rumors stated, the new Apple TV is significantly smaller than the previous generation. That’s partly because it no longer utilizes a spinning disk hard drive for local storage. Flash memory now handles that task, but it’s really only for buffering as it’s not that large. This device is after all a low-cost streamer designed not to hold your media, but to access it from other locations.

The real news is the added content. Apple feels that people do not want to manage local storage — hence the lack of hard drive — and so content will be delivered from the cloud. Keep in mind, there’s no purchasing content, just renting. First-run movies will be available the same day that they hit DVD for $4.99. TV shows now cost $.99 rather than the old price of $2.99 but only Fox and ABC are on board right now.

Then there’s Netflix. Yep, it’s in the box as well and so is YouTube. Both are available through beautiful custom-built UIs. No more red screens for Netflix. (yay!)

But while the retail tag is only $99, it isn’t exactly cheaper when you figure you have to rent all of the content. Apple didn’t announce anything about connecting to your computer or personal cloud. Correction, the Apple TV now features AirPlay, but that only allows users to stream from iPad and visa-versa. There doesn’t seem to be anyway to pull content from a network-attached storage. (I hope I’m wrong) Update: So as it turns out, there is network access, but only with very limited supported video formats. Don’t expect a lot of your downloaded content to play.

The new Apple TV will be available in 4 weeks, with pre-orders starting today.