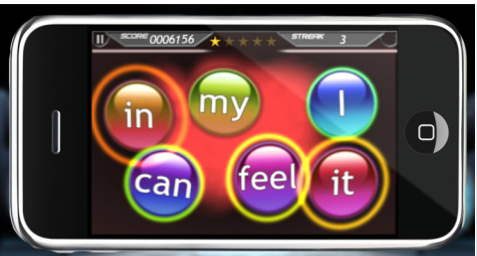 Earlier this year, mobile developer TuneWiki raised over $7 million to expand beyond the namesake lyric-centric music player that put it on the map. Today sees the company’s first major expansion with the launch of a new iPhone game called Lyric Legend, which combines lyrics with the rhythmic gameplay that made Tapulous’s Tap Tap Revenge a massive hit.

Playing Lyric Legend is pretty straightforward: fire up a song and you’ll see a series of bubbles appear on the screen, each with a different word on it. The song you’ve selected will start playing in the background, and it’s your job to tap each word as it’s sung. There are some bonus tricks involved (you hold your finger on a word when it’s sung for a long time) but even these techniques are easy to pick up.

Of course, if you want to get good at the game you’ll have to actually learn the lyrics of each song, though you can get by in the easiest mode without knowing all of them.

I played the game during its beta and found it to be fun and easy to pick up, and it’s different enough that it doesn’t feel like a complete Tap Tap Revenge clone. That said, the game still needs some polish — the graphics are a bit bland and they don’t change to reflect the song you’re singing. And only time will tell if this will be able to attract the massive following that made TTR one of the iPhone’s most popular applications ever (it’ll be tough).

The free game only comes with three songs (including tracks from the All-American Rejects, Metric, and Vampire Weekend). You can round out your library using an integrated music store that sells songs in 2-pack bundles for 99 cents, with available bands like Kanye West and Coldplay.

Lyrics are comfortable territory for TuneWiki. The company’s original app, which is available for both iPhone and Android, allows users to watch lyrics scroll onto the screen as their song plays, karaoke-style. They app also includes some social features, like being able to see the most popular songs in different geographic regions.