Booyah’s InCrowd, famously announced by founder Keith Lee at the Facebook Places launch event earlier this month, just hit the App store. InCrowd is the first of the inevitably many apps that will be built off the Facebook Places API and the only location-based app that has exclusive access to Facebook search.

Touted as part game and part social utility, InCrowd is unique in the LBS space as it goes beyond collecting check-ins and allows users to experience a virtual world corresponding the real world visited in Places. Like a location-based Second Life, InCrowd app users can create their own customizable avatars, “interact” with old and new friends nearby as well as accumulate status and virtual goods.

Taking off of Nightclub City’s (somewhat cheesy) avatar system, the game is targeted at high school and college students who want a way to express real life social behavior in the virtual world. This is evident in the fact that the app goes way beyond “Pokes” allowing virtual denizens to “High five” “Fist bump” and execute the particularly popular “Dropkick” as well as update their status and provide tips.

And just like high school, the interactions also play into a user’s popularity level, which runs the gamut from “Trendsetter” to “VIP” according to Lee. The higher your popularity level, the more your avatar “glows” while traversing InCrowd’s virtual environs. The game also offers users a short cut, so you can buy more status or “energy” if you’re feeling low. 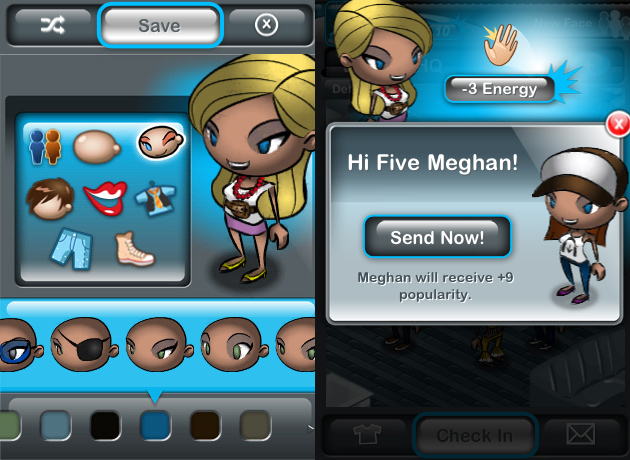 In terms of privacy settings, Lee says he’s really sensitive to user feedback. If your Facebook friend checks in using the Facebook site, the Facebook mobile app or InCrowd, you still can see their check-in info on the app. However you can only access the app through Facebook Connect and only “see” the avatars of other people who have elected to use the app to check-in to Places. There is also an invisible function in InCrowd, so users can mask their locations and check-ins. But if an invisible user wants to “Dropkick” another user, for example, then their location will show up, but only for the given user they have chosen to “Dropkick.”

Lee is currently working with different partners to ramp up the locations on the app, which he playfully describes as “The Matrix.” He hopes that eventually, the InCrowd Starbucks will look like a Starbucks, the InCrowd Best Buy will look like a Best Buy, etc. As to how the app might work with the flagship property MyTown (Booyah’s partnership with Google Places), Lee says that the overall Booyah strategy is location plus entertainment, so eventual integration with apps like Nightclub City, which as the 5th fastest growing Facebook app has over 1.3 million daily active users.

You can find the app here. 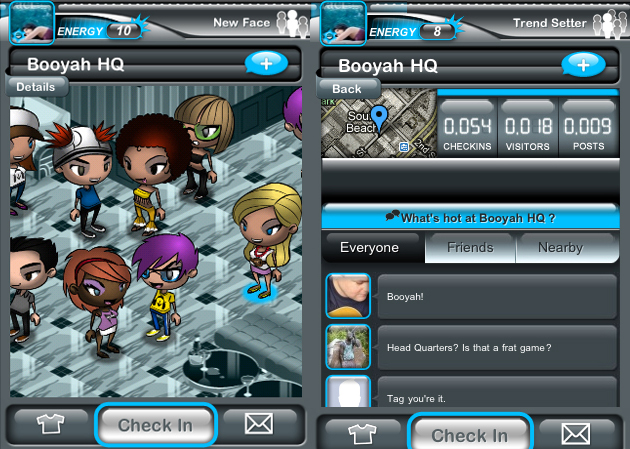 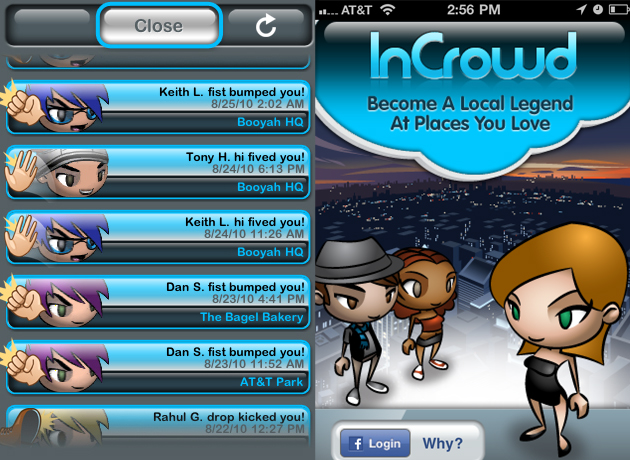