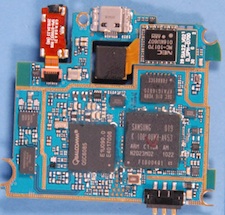 With the Samsung Epic 4G launching very soon, here’s an interesting alternative view of the device. If you dig around enough on the FCC website, you’ll be able to find nude pictures of almost every phone. Sometimes they are barely legal shots, like this Samsung Epic 4G.

Wireless Goodness found these shots, and has a much more comprehensive idea of exactly what’s going on with the various circuits then I do. For example, the shot up above is of the main board and CPU: a Samsung Hummingbird processor running at 1GHz. The Hummingbird is a not so distant cousin of the Apple A4 processor, as both are made by Samsung. You can also see the NEC MC-10170 chip, which is the same video processing chip found in the Galaxy S devices.