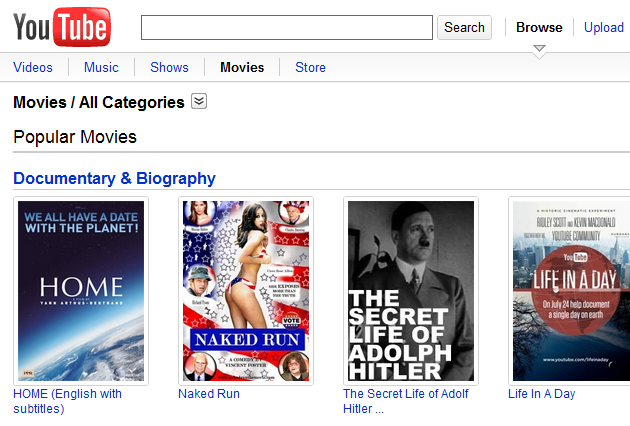 YouTube has launched a fresh Movies category on its website, gathering about 400 full-length films for your on-demand viewing pleasure, all free of charge.

The renewed section, which is actually more like the next step in previously announced projects, comes courtesy of deals the Google company struck with U.S. studios like Lionsgate, MGM and Sony Pictures and UK service Blinkbox.

Update: Google checked in to clarify this is a UK announcement only and doesn’t affect the US Movies section announced last year (see link above).

In addition, the company wanted to make clear that the MGM / Lionsgate / Sony Pictures content is currently only available in the US, not in the UK.

What can you find there? Loads of Bollywood flicks, a bunch of Bruce Lee and Jackie Chan films, obscure horror movies and cartoons, among many other sections.

“This is one of many efforts to ensure that people can find all the different kinds of video they want to see, from bedroom vlogs and citizen journalism reports to full-length films and TV shows,” YouTube head of video partnerships Donagh O’Malley told The Guardian.

“We hope film lovers enjoy the range of titles in this free library, whether catching up on a mainstream hit or delving into the vast archive of classic films from decades past.”

Personally, I haven’t spotted many mainstream hits or real classics in the catalog, but maybe it’s just me. Ah well, off to watch Teenage Devil Dolls.