As you may be aware, to send a tweet to StockTwits, you have to append the “$SYMBOL” syntax to your tweet. The same idea will now work with these private stocks that SecondMarket tracks. For example, if you’re interested in TechCrunch stock, you’d tweet your thoughts with “$TCRH” appended on to the tweet. For Facebook, you’d use “$FBOOK“. For Twitter, “$TWIT“. And so on.

When you do this, these tweets get pulled into the StockTwits system and you can see a stream of what people are saying about these stocks on individual pages there. SecondMarket then pulls in these curated tweets as well from StockTwits to supplement their own pages.

SecondMarket currently tracks about 500 private companies that aren’t yet public but have interest from outside investors in their stock. The company has made their own proprietary symbols for each of these, and those are the ones (as shown in the examples above) that StockTwits will be using. As more are made by SecondMarket, StockTwits will add them to their system.

SecondMarket has completed some $300 million worth of transactions involving these private stock sales. And there is currently over $30 billion in assets available on the market — thanks largely to companies like Facebook and Zynga which will undoubtedly go public sometime in the next few years. Those two companies and others — like Pandora, recently — have fueled the explosion in interest in these non-public tech stock markets. And StockTwits is smart to attach itself to this wave.

Get tweeting about that hot $TCRH stock. 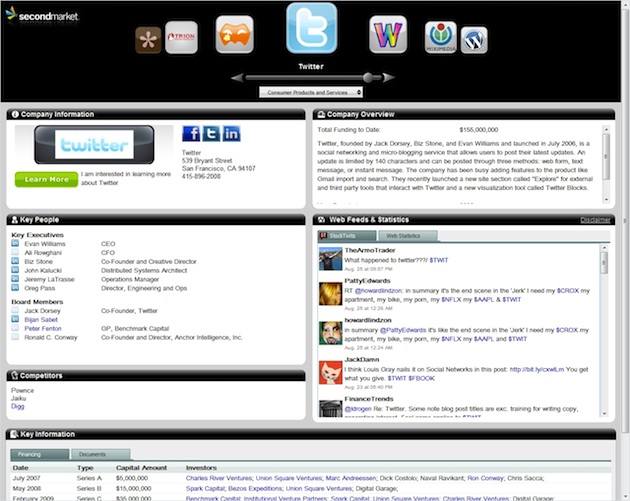