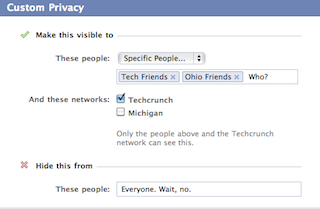 A couple days ago, I wrote a post wondering if it wasn’t time to change Facebook’s social graph dynamic? Specifically, I called for a simplified system that had two layers: your friends and your followers. I think that their current social management system which relies heavily on friend lists is highly flawed. And guess what? Mark Zuckerberg agrees.

Tonight at a Facebook Developer’s Garage meeting at Facebook’s headquarters in Palo Alto, Zuckerberg fielded a question about the service’s privacy controls. He said that the ideal solution for sharing different things with different people is to make a friend list. “But guess what? Nobody wants to make lists,” Zuckerberg admitted.

Exactly. While the idea behind friend lists is great, for the average user (in other words, 99 percent of Facebook’s 500 million users) it’s simply not something they’re going to do. Or even if they make them at first, it’s not likely something they’re going to keep up with. Facebook has tried to lower the barrier to entry a few times (most recently a couple days ago) but they are still simply too time-consuming to set up and maintain.

My solution is the two tier system: either someone is a friend and you have to accept them as such. Or they’re a follower — meaning they can opt-in to following your public updates without you having to okay them. When you update on Facebook, there would then be a big switch to decide if you want something to go to just your friends or to your followers (which would include your friends).

I see no reason why there couldn’t be an option to use lists that further filter things beyond that. But friend/follower would be the main list/function that everyone used.

Zuckberg is clearly thinking a different way to solve the lists issue. He thinks it still has to be something like friend lists, but done a different way. He noted that they have to come up with a way for people to control each thing they want to share, but do it in a way so that the tools are really easy to use.

Again, even with such a vague statement, I’m worried that this is going to be too complicated.

To be fair, it’s an insanely difficult problem Facebook is facing — and Zuckerberg knows it. He notes that after over six years of adding various privacy controls over features, things became “really hard to use.”

But he still believes in the idea of sub-groups of friends because the average user has something like 50 friends now — and people who use Facebook more often, have a lot more. Those users might not want to share all their information with even just those people. Or worse, he noted that “the people who you are most afarid of seeing [some item] are on your friends’ list.”

He also spoke to the fundamental idea of friending someone and them accepting it as what they need to look toward going forward. He also believes the problem may simply come down to design. Again, the idea behind friend lists is correct in his mind — it’s just the implementation that isn’t. I still like my idea.