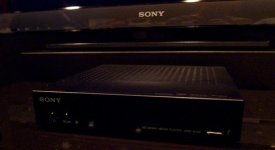 We didn’t get an official announcement, but it looks like Sony is going to be selling their own version of a Netflix and Amazon video streaming netbox. Get this though, the Sony product plays the much wanted MKV and DivX files – something conspicuously missing from other company offerings. The Sony product (who’s name we don’t have yet) runs on wireless N, supports 1080p, has a USB storage connection, and is controlled via Sony’s iPhone and Android apps. Price is expected to be at $130, and Gizmodo says that should see them around the end of September. We’ll update you as more information becomes available.