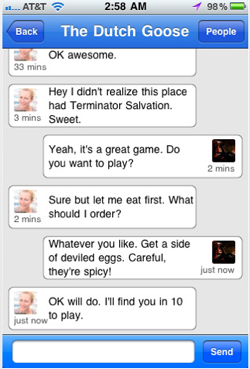 With the rise of GPS-enabled smartphones, developers are eager to integrate location-based functionality into whatever they can. So it’s no surprise when MessageParty, a Y Combinator company that’s launching this week, says that it’s looking to tie location with chat rooms to let you communicate with the people around you in real-time. You can download the company’s iPhone app right here.

The app is very straightforward. Open it, and you’ll see a list of chat rooms that have been created within 1000 feet of you. Once you hop into a room, it’s a pretty standard chat channel. It’s safe to say that the application is still in a very early form — you can’t direct message users yet, and if your GPS signal goes out then you can’t chat, either. The company plans to add additional functionality, like ‘favorite’ chat rooms that you can access even if you leave the room’s proximity, in the next three weeks.

This isn’t the first location-based chat service by any stretch, but cofounder Amanda Peyton believes it’s among the first that prompts users to break their chats into segregated rooms — other apps tend to dump everyone within a certain radius into one large chatroom.  This system makes the application good for situations where you may want to create multiple rooms in the same area — like at a conference, for example.  The application is free, and will likely monetize through ads, Peyton says.