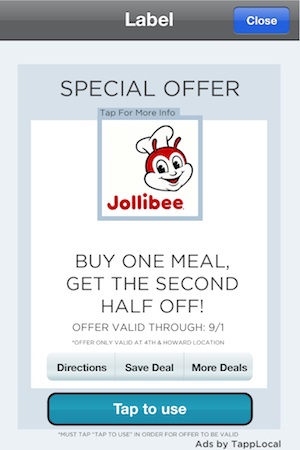 If you’ve used Foursquare, you’ve likely seen the little badge that appears in the corner of your mobile phone’s screen when a deal is nearby. It’s a good way to alert someone to a location-based offer, and it seems to be working well for the company. A new startup, TappLocal wants to take that idea and expand upon it to create a new location-based ad network.

The way this works is that TappLocal uses their backend to create a geofence around certain partner venues. When a user crosses that boundary and happens to be using one of the partner apps, a deal indicator will pop-up. A quick click on this area will open a larger area explaining exactly what the deal is. Simply click one more time to verify you wish to use the deal, show it to the store that it’s valid at, and you’re good to go.

Co-founder William Kasel fully understands that this is a hot space right now, and that’s why he and his team behind Jumpfox, a mobile app development company, wanted to pour resources into this new project. And thanks to their developer ties, Kasel says they’ve already signed up mobile apps that have a combined 1.5 million users to be a part of their beta test (though he won’t list any of them individually).

And it’s not just these proximity deals that TappLocal is working on. Another good idea is their flash deals: a way for local merchants to move certain items quickly. Say some product is going to go bad, or it’s a slow time of the day in terms of foot traffic, a merchant could trigger this deal and have it distributed across TappLocal’s localized network.

Kasel is quick to note that they don’t want to spam users. But at the same time, they’ve seen the incredible usage rates that SMS deals can get. They hope to find a good middle ground — and they think they’ll have that thanks to their distributed network.

Currently, the TappLocal service can be integrated with iPhone and Android apps, but they’re working on other platforms as well. The real key for the team is to get localities up and running. Currently, they offer deals in San Francisco, but New York, LA, and Chicago are all coming soon. They’re in the process of building up sales staff in each of those areas.

When asked what’s to stop the big competitors like Google or Yelp from wiping them out, Kasel says that their system is easier to implement than anything Google is likely to do soon. “It’s all about getting momentum now,” he says. Yelp, meanwhile, “is like the mafia,” Kasel says indicating that they’re trying to fight the good fight for local merchants.

He notes that they will be very transparent with the costs for using TappLocal. There will be a one-time fee up-front, followed by smaller monthly fees and a cost-per-conversion rate.

The service is still in closed beta testing, but you can sign up on their site to find out more. They hope to fully launch sometime in the next few months. Kasel founded the service alongside Laura Castaneda and Guilherme Carvalho. 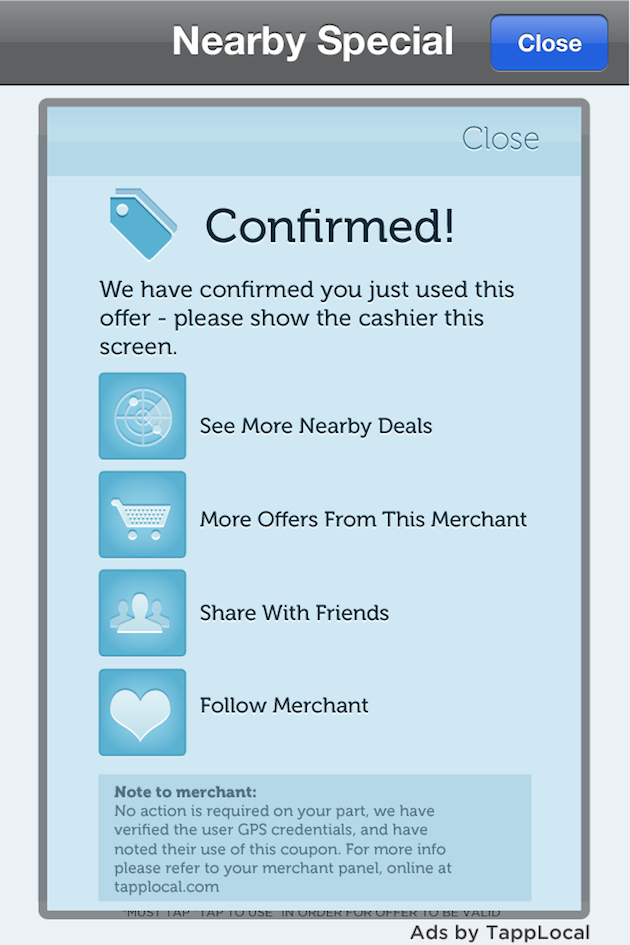