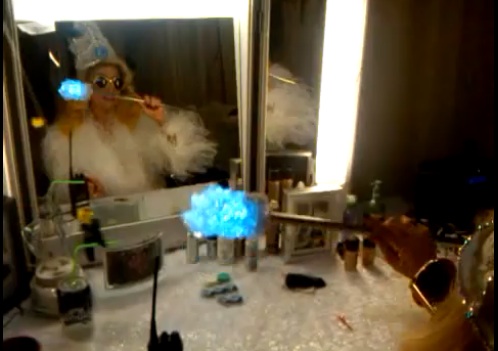 Oh, glorious day. Britney Spears is no longer the Queen of Twitter. She has been toppled from her thrown. A cultural milestone? Perhaps. But wait. The new Queen of Twitter is Lady Gaga. Is that any better? At least she is more entertaining, or at least more self-aware.

Sometime last night, her highness Lady Gaga passed Britney in Twitter followers. She currently has 5,777,492 to Britney’s 5,721,702. And she gloated appropriately enough via Twitter and the odd YouTube video below.

There are currently only five people with more than five million followers on Twitter (Lady Gaga, Britney, Ashton Kutcher, Ellene Degeneres, and Barack Obama). Justin Bieber will soon join them. The top ten people on Twitter are all celebrities, as is most of the top 50. Twitter is mainstream, and has been for a while. But which of those celebrities is able to rally their followers the best to actually do something—whether that is buying albums and concert tickets or rallying behind a cause?

In a way it is appropriate that LAdy Gaga is now at the top of Twitter. It is the ultimate medium for constant self-promotion.

The Queen is dead. Long live the Queen.