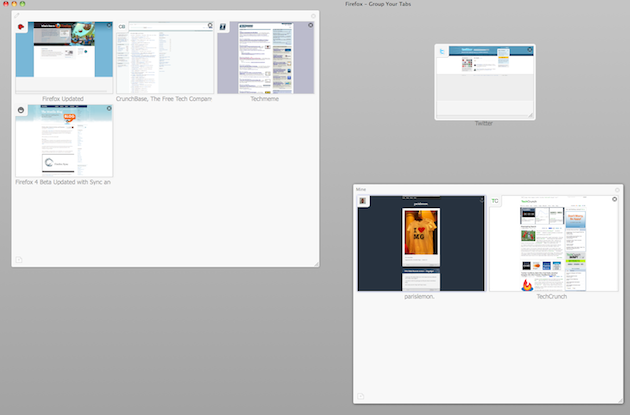 Last month, we wrote a post giving a quick overview of a potential new Firefox feature called Tab Candy. 1,900 tweets, 2,000 Facebook Likes, and 285 comments later, it’s clear that there is a lot of interest in the idea. Mozilla clearly recognized that as well, as they’ve already decided to make sure the feature is a part of the upcoming Firefox 4 release. And they’ve given the feature a new name: Panorama.

A new post today by Mozilla’s Asa Raskin shows off the polish they’ve added to Panorama in the past month. Included in the latest beta build of Firefox 4 (build 4), the feature seems much smoother and more stable than it was previously in the experimental early builds of Firefox. That said, the idea is the same: a way to easily organize clusters of tabs together in different windows. You can then zoom out with the click of this Panorama button (or keyboard shortcut) and see a macro-view of all your windows/tabs. Yes, it’s a lot like the Expose feature that Mac users are accustomed to.

Raskin notes that it took seven months for this feature to go from sketches to inclusion in Firefox — a very short amount of time for such a project. The idea’s roots lie in Firefox Mobile concepts dating back to 2008, Raskin notes. He then goes into some of his principles for design and lays out why Panorama works from this perspective. The one that stands out to me is:

Remove distractions: out of sight, out of mind. This is the corollary to seeing is remembering. We, as humans, are bad at multitasking. As practitioners of GTD know, the secret to productivity is removing distractions and focusing. Piles let you visually hide the pages by which you don’t want to be visually distracted, which strategically requires recall-based memory. When you are in a group, you only see the tabs related to the task at hand, again allowing you to focus. Strategic hiding is key to a mind free of info-guilt.

See more about Panorama in the updated video from Mozilla below. You can find the latest beta of Firefox 4 here. It also includes Sync on top of Panorama.