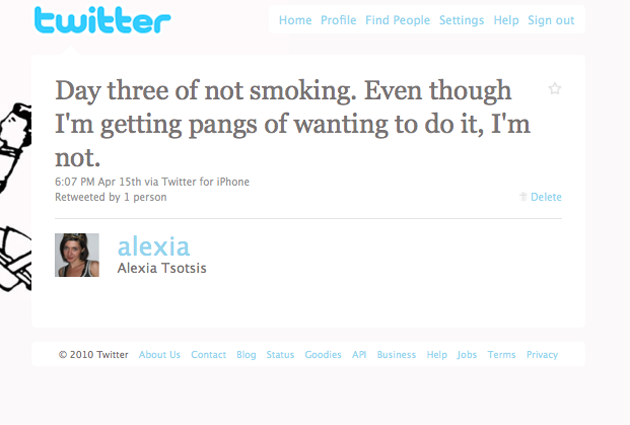 In this Sunday’s New York Times, reporter Brian Stelter outlines his using Twitter as a tool for weight loss by setting up a @brianstelter25 account for his progress and tweeting out his exercise plan and meals.

“I knew that I could not diet alone; I needed the help of a cheering section.”

He ended up losing 75 pounds.

On my birthday this year, I decided that 15 years of smoking were enough and tossed cigarettes. I didn’t tweet about it at first, mostly because I felt really sick from nicotine withdrawals –- but on day three I mustered enough energy to pound out the above missive.

The amount of support I received then and in the days afterward was overwhelming, and much like Stelter I would have felt like I’d let people down if I picked up a cigarette instead of my iPhone. 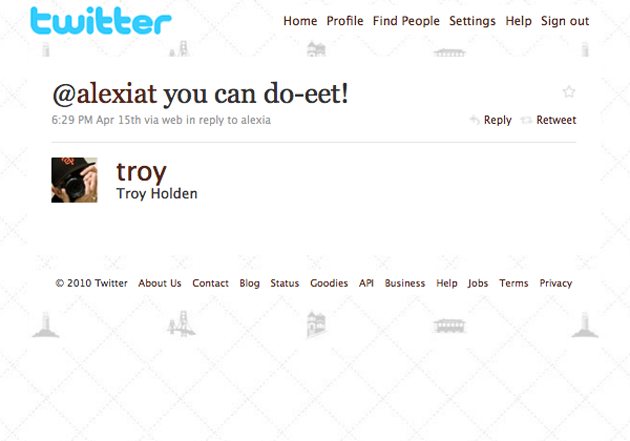 I stuck to my guns and stuck on my nicotine patches, tweeting instead of smoking when in at-risk situations like parties with friends and passing by airport entrances.

I loved smoking like Stelter loved Dunkin’ Donuts, but seeing the support tweets like this one from Lowercase Capital’s Chris Sacca and this one from Twitter’s Troy Holden made me think twice before buying a pack of cigarettes, no matter how much the urge to smoke burned. 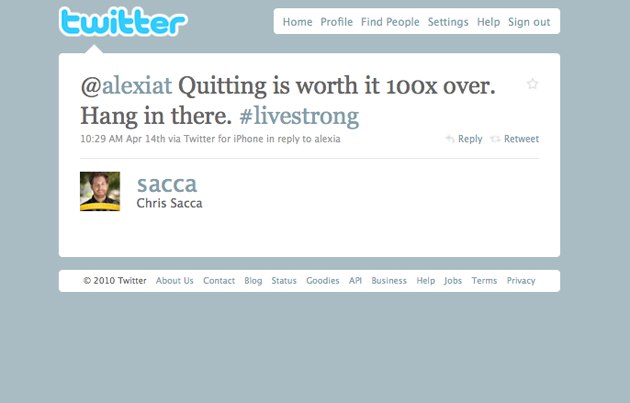 I could not quit alone, I needed the help of a cheering section.

Why do people overeat, or smoke or drink in the first place? In my experience it’s either because they want attention or need to be soothed. If you can replace the “stress relief” or whatever satisfaction unhealthy behaviors give you with the positive feelings engendered by reinforcement from the people you’re connected with on Twitter, then Twitter becomes a powerful supplemental tool in the management of addiction.

“Then she mentioned, casually, ‘By the way, I’ve lost 50 pounds along with you.”

The idea of using Twitter as a support group is as new as Twitter itself, but I’ve heard countless stories like Stelter’s, whether it’s OneForty’s Laura Fitton using it to make sure she does her yoga poses every day or our own Paul Carr and his successful attempt at quitting drinking.

One of the more haunting Twit-quitting stories: ZDNet blogger Marc Orchant’s last tweet before his death was in support of blogger Aaron Brazell’s efforts to kick the habit. 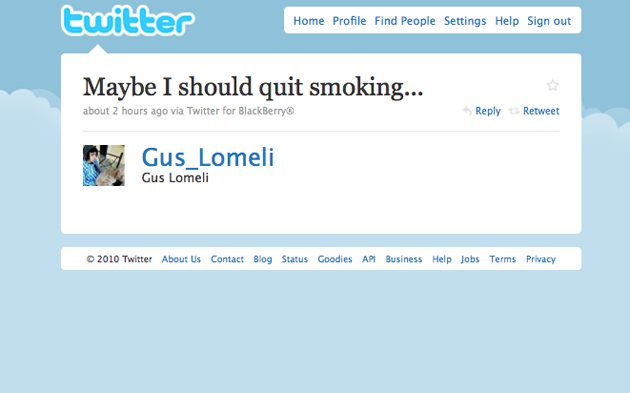 And of course, there’s a Twitter app for that.