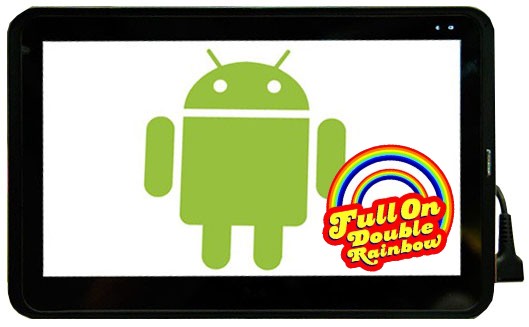 You know what? The LG Marketing VP should get a raise. Stating the LG Optimus Tablet will be better than the iPad to the Wall Street Journal won the Internet today. It is without a doubt one of the most talked about tech stories of the day, which means the VP of Marketing simply did his job.

Our post on the tablet is today’s most commented story across the entire TechCrunch network. It’s Engadget’s second most commented post of the day and one of the highest visited posts on Gizmodo so far today. It even occupied the top spot on Techmeme for most of the day with 25 blogs joining in on the conversation. All because of a silly little quote.

The old adage that there’s no such thing as bad publicity still applies today. I didn’t catch one article about the LG tablet that was all-out praise or didn’t mention the iPad at least a few times. Most everyone doubted the VP’s statement at least a little.

But that’s fine. I didn’t even know that LG was working on a tablet before the story broke early this morning. That’s probably true for most of our readers. A few months from now, no doubt after a couple of carefully-timed ‘leaks’ and pre-announcements, the tablet will finally hit the retail market and we will all have in the back of our mind that this thing is supposed to be better than the iPad.

Chances are the VP’s statement is a bit of an exaggeration. That’s his job, right? He supposed to talk up his company’s products like they’re the best thing in the world. After all, most of the time, the only thing separating a salesman from a marketing flack is a college degree. Their goals are often the the same. But there’s a thin line here. It’s fine to talk up products when they’re months away from release. We’re a fickle bunch and as the product nears release and more info becomes available, our expectations will likely level off.

Perhaps the LG tablet is better than the iPad. We haven’t seen it. We have no idea whether it is or not. However, if LG keeps talking it up like a bonafide iPad killer, it better deliver. Perhaps it should be called the LG Optimistic instead.