Inkling, a startup that develops a digital textbook platform, has just raised an undisclosed amount of Series A funding today, led by Sequoia Capital with participation from Kapor Capital, Sherpalo Ventures and Felicis Ventures. Inkling had previously raised seed funding from Mitch Kapor and Ram Shriram. Inkling has added Peter Currie, Former CFO of Netscape, and Bryan Schreier, Partner at Sequoia Capital, to its board.

As the iPad and other tablet devices become a go-to device at schools and colleges for consuming textbook content, Inkling is hoping to help publishers capitalize on that growth. Inkling’s platform, which launched today, delivers interactive textbooks that feature the ability to collaborate, add multimedia and communicate within content. Inkling aims to add another layer to online textbooks by adding 3-D objects, video, quizzes, and even social interaction within the content.

Inkling’s sync technology lets students collaborate in real time by sharing their notes and highlights with one another. And students can see comments from their friends and professors right alongside their own notes.

The startup has already struck a number of content development partnerships with textbook publishers, including Cengage Learning, John Wiley & Sons, McGraw-Hill, and Wolters Kluwer. Inkling will partner with these publishers to add interactivity to textbook content.

Inkling launch today also coincides with the public debut of its iPad app, which is available in the App Store. 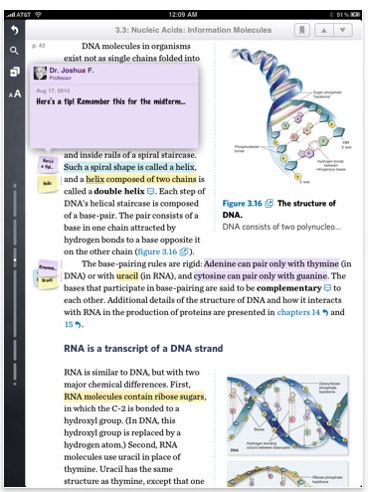