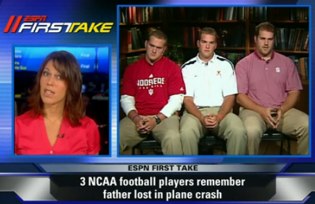 This is crazy – and terribly sad – and we didn’t become aware of it until a few hours ago. But former TechCrunch intern Andrew Phillips’ father died in the Alaska plane crash last week. We reported on Senator Ted Stevens passing in that crash, but we weren’t aware that Andrew’s father Bill Phillips, who was formerly Stevens’ chief of staff, was also on the plane.

Andrew’s younger brother Willy Phillips was also on the plane and survived, and is expected to recover fully. His worst injury was a broken leg, which occurred after the plane crashed.

Andrew and two of his brothers were on ESPN First Take on Wednesday morning to talk about their father. All three of the older brother play division 1 college football, and they plan on establishing a fund in honor of their father that will assist college athletes in time of need. We’ll make a donation and post details as soon as it’s established.

Thanks to ESPN for letting us pull this video into our system so that we can embed it properly (Andrew is on the right). And Andrew, our heart goes out to you and your family.