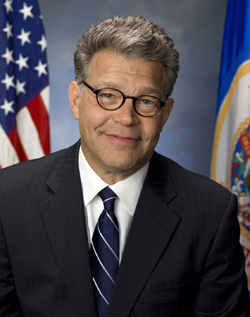 It looks like Sen. Al Franken, of Minnesota, wants to be Net Neutrality’s white knight. In the end, it doesn’t matter who want to be “that guy” so long as there’s a voice in Washington saying the right thing. Because as much as we can bang on here about Net Neutrality, we don’t exactly have millions of dollars to lobby Congress to see our point of view.

So, back to Sen. Franken. He’s set to speak tonight (7pm ET) at an FCC hearing in Minneapolis, where he will “stand up” for Net Neutrality.

Allow me to quote an e-mail he sent a few moments ago:

You may have heard that, a few weeks ago, Google and Verizon announced a proposed policy framework that they claimed would protect net neutrality.

Unfortunately, that’s simply not the case.

The Google-Verizon “framework” was written so as not to apply to wireless Internet services. If you use wi-fi or access the Internet on your phone, this is a serious problem. Their framework could even allow for corporations to pay for premium access to the “wireline” Internet.

This framework doesn’t protect net neutrality — it undermines it.

We can’t let corporations write the rules they’re supposed to be following. Corporations are responsible only to their shareholders, and they will always act to maximize profits. The government — which is responsible to the public — has to write tough rules to protect net neutrality and reverse the trend towards media consolidation. And you and I might have to be the ones to force the government to do it.

A lot of this sounds too perfect, but the line “We can’t let corporations write the rules they’re supposed to be following” is pretty great. It pushes the all the right buttons, so to speak.

Not that I have any faith that Net Neutrality won’t be destroyed by the monied interests, mind you.