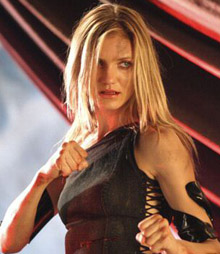 Not according to me – I haven’t yet had the pleasure of meeting both women in person, unlike Justin Timberlake – but according to security software company McAfee, which has just published the fourth version of its delightfully linkbaity report entitled “McAfee Most Dangerous Celebrities™” (see, I linked, so the strategy works!).

McAfee purports that its research shows that searching for photos, information or videos of the famous actress is super duper dangerous. According to the company, there’s a ten percent chance of landing on a website that’s tested positive for online threats, such as spyware, adware, spam, phishing, viruses and other malware when looking for shots and whatnot of La Diaz on the Web.

Last year, actress Jessica Biel took the top spot in the ranking, which means … well, I don’t know what the heck that’s supposed to mean, but the stats don’t ever lie and if McAfee says Biel is now the third most dangerous celebrity on the Web instead of numero uno, than I’d like to see your counter-arguments, damned!

(On a sidenote, McAfee was just acquired by Intel for oh, $7.86 billion in cash)

Not that the report bears not a single nugget of uplifting news, fortunately.

“This year, the search results for celebrities are safer than they’ve been in previous years, but there are still dangers when searching online,” said Dave Marcus, security researcher for McAfee Labs.

Thanks for giving us the heads up, Dave! Let us know when it’s safe again!

Here’s the full list of the top 5 celebrities from this year’s study, with the highest percentages of risk (you’ll have to click the link at the top for the top 10 list): 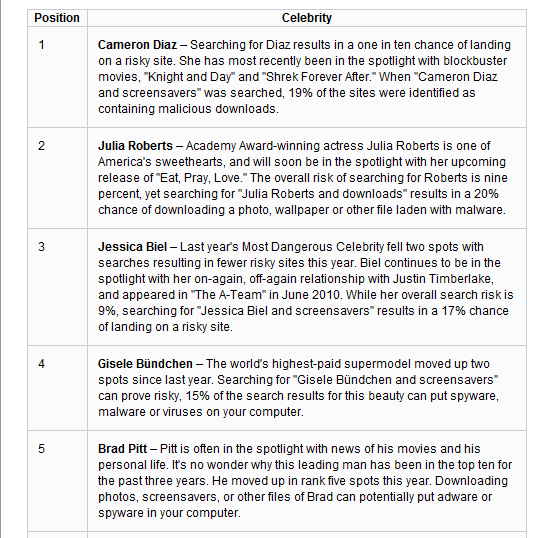 As for less dangerous celebrities: McAfee says Justin Bieber (who is that? he keeps popping up in my Twitter stream continuously) ranked towards the bottom of the list at #46. Also not very dangerous: U.S. President Barack Obama (#49) and Sarah Palin (#50).

I’m in need of some very strong coffee now, if you’ll excuse me.