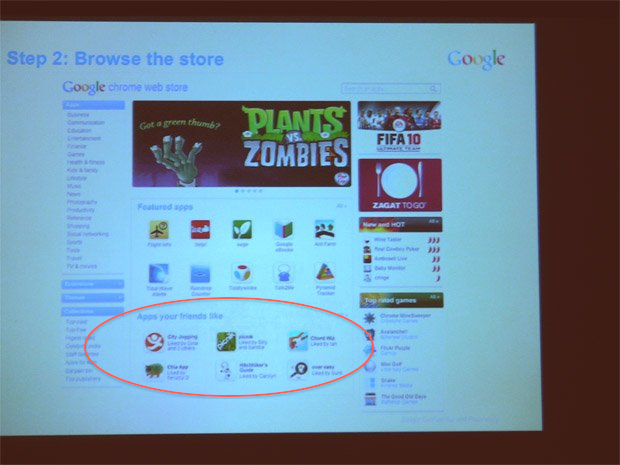 Earlier today, it was revealed that development of the Chrome Web Store is well underway, and Google hopes to deploy it around October. That’s good news, and the fact that Google apparently only plans to take a 5 percent of revenues from developers is great news. But look closer at the screenshots leaked from GDC Europe. See that area in the store called “Apps your friends like”? Yes, it appears that this new store will play nicely with Google’s new social strategy.

The key word in the area is “friends.” If you look at Google’s current social products (Buzz, Reader, Wave, etc) none of them use the term “friend” to indicate a connection with another user. Instead, social connections are all “followers” or “contacts” or “connections.” Hell, even Friend Connect (which, let’s face it, no one talks about anymore) doesn’t really use the term “friend” too often outside of its name.

The only Google property that seems to use “friend” regularly is Orkut, Google’s social network which is only really widely-used in Brazil. Something tells me the Chrome Web Store isn’t going to be built around Orkut’s social graph. Call it a hunch.

Instead, we can probably expect the Chrome Web Store, like many other Google properties, to take advantage of the new social project Google is currently working on. While the company still won’t officially talk about it, they have acknowledged such a project exists, and we believe executive Vic Gundotra has been tapped to oversee it.

If you look even closer at the pictures, you can see that Google will serve up recommendations in the Chrome Web Store based on games your friends “like.” Whether this is through some sort of Facebook-esque Like button, or simply through some kind of rating system isn’t clear. But clearly Google plans for the Chrome Web Store itself to be a social experience. Some games have notes stating they were “liked by SOMEONE and X others.”

Interestingly, if I’m not mistaken, it also appears that Google is using first names to distinguish who liked something. This seems to suggest the social graph intended to work here won’t be that big. But who knows, this could just be a mockup to demonstrate the intended funtionality.

During the GDC presentation, representatives from Google talked about the opportunity in social gaming as it relates to the Chrome Web Store. Obviously, they need the social aspect to make that work.