If your social graph on Facebook and/or Twitter happens to consist of people who speak many different languages, it’s not always easy to make sense of their status updates.

I know it can be a pain when people I follow constantly switch back and forth from English to Russian, Italian, Hebrew and so forth – because I don’t speak any of their native tongues nearly well enough to get what they’re saying, even though at times I wish I did.

Enter the new version of XIHA Life, a social networking service that allows people to easily connect online even when they speak different languages, thanks to its real-time translation capabilities of chat sessions and update streams.

With the latest update to the XIHA platform, you can connect to both Facebook and Twitter and gain the ability to translate status updates and comments from your friends on those two major social networks with a single click.

The new buttons allow XIHA friends to translate content to over 55 different languages (courtesy of the Google Translate API), making it possible to read updates, polls and interests in one’s native language regardless of the original language of the status update.

XIHA says the feature should prove to be particularly helpful for expats and travelers who tend to meet with people from different cultures but still wish to stay connected despite of those pesky language barriers. 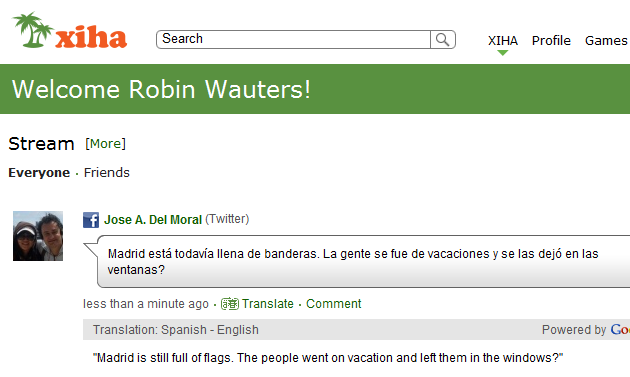