It’s hard to believe, but in the days before blogging and Twitter plenty of people still found a way to record the personal (and sometimes mundane) details of their daily lives. But instead of sharing them with the world, they simply jotted them down in a book kept hidden in the sock drawer or under a pillow. Turns out, the personal journal is still alive and well, and now Y Combinator-funded startup OhLife thinks that it can make it even more popular by bringing it to your inbox.

The service is as simple as they come. After filling in a standard signup form, you’ll receive an email inviting you to submit your first journal entry. Simply reply to that email message and you’ll have your first journal post. Your posts are all archived on the web for future reference and are kept totally private — this is all meant to be kept private, so you won’t find any Facebook share buttons here.

Granted, some people have no inclination to record their daily thoughts (myself included), but there are definitely plenty of folks who have attempted to keep a personal journal, only to forget about it a few days later. This site is for them. After signing up OhLife will promptly email you every day at 8PM to remind you to add an entry — to do so you simply reply to the email message you’ve received. To help keep you engaged, each email prompt you receive will also include a random past entry, which can help you reflect on where your life was a few weeks or months or (eventually) years ago. 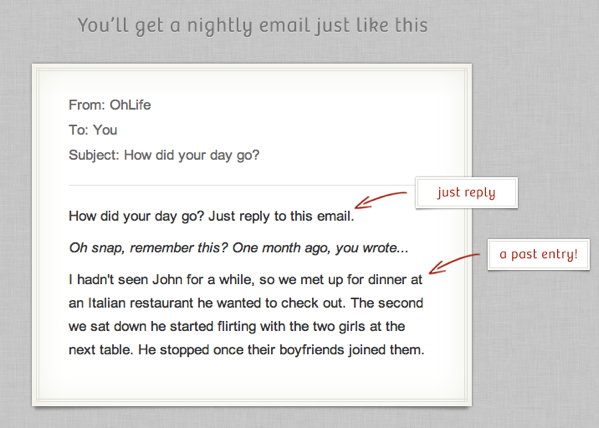 It sounds far too basic, but the OhLife team says that it works: they report that 50% of users who complete their first entry have continued to add an entry at least once every other day. It probably helps that, despite the spare feature set, the site is very nice to look at. At this point OhLife isn’t doing anything to monetize, but if it can get traction then the  team will consider freemium options.

OhLife faces a few obstacles. For one, the site is inherently private, so it may be difficult for it to spread virally. The basic feature set also makes it easy for other companies to reproduce, and there isn’t much of a lock-in effect because there’s no social component. That said, it does one basic thing very well, which may be enough for it to gain traction.

OhLife is actually the third startup to come from this YC team — the founders previously built IDidWork and MeetingMix, the latter of which is still alive (though it doesn’t have a sizable user base). 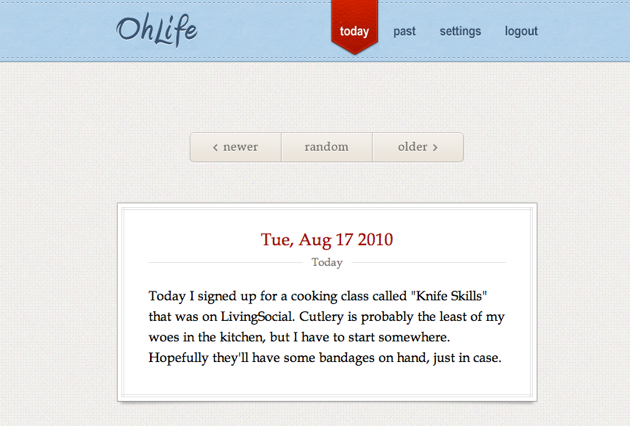